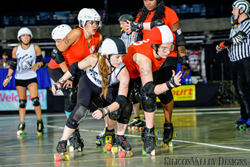 USA Roller Sports will host the first tryout sessions for the recently created National Team, a squad that will represent the United States in international competitions affiliated to the US Olympic Committee and FIRS.

Penn Ice Arena will be filled with the sound of whistles and cheers as the rink is transformed into a playing field for the Roller Derby National Champioship, Aug. 28-30, presented by USA Roller Sports (USARS). The top USARS roller derby teams in the nation will battle to win the Seltzer Cup, named for the man who created roller derby in 1935, Leo Seltzer. Admission to the event for a single day is $10, a three-day pass is $25, and children age 7 and under are free. Tickets are available at http://www.brownpapertickets.com/event/2019194, or by calling Brown Paper Tickets 24/7 event concierges at 1-800-838-3006.

The National Championship will feature the top Women’s teams in the country, including the 3-time National Champions, the Oly Rollers. The team from Olympia is ready to take on any opponent, but will have a serious challenge defending their title against highly competitive rivals. The hosts, the Pennsylvania All-Stars, have more experience playing USARS rules and are ready to use their talent in front of a supportive local crowd. The Chicago Red Hots, who have played several seasons using the USARS rules, come to the tournament with serious aspirations to the title after having played more USARS games this season than any other team. A rebranded team this year is Northwest United, who took over where Antagonist Roller Derby left off after taking second place at last year’s Nationals. They come from Seattle with a young and extremely talented group of players to fight for the trophy.

For players competing at the tournament, as well as for any other interested players, USARS will host the first tryout sessions for the recently created National Team, a squad that will represent the United States in international competitions affiliated to the US Olympic Committee and FIRS. Tryouts are open to all USARS members. Membership applications will be available onsite for interested players who are not USARS members.

USA Roller Sports (USARS) is recognized by the Federation Internationale de Roller Sports (FIRS) and United States Olympic Committee (USOC) as the national governing body for competitive roller sports in the United States. USARS is dedicated to creating, enhancing and conducting the best competitions and programs for roller sports. We instill the drive to win and be the absolute best in sports and in life.