United Foundation to Advance the Open Web by Serving Developers 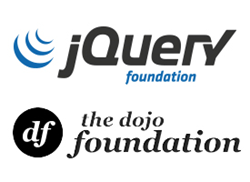 The jQuery Foundation and Dojo Foundation today announce plans to combine forces to form the largest, most diverse and most comprehensive Foundation committed to building the Open Web by serving developers, their projects and their communities.

Timmy Willison, jQuery Core Project Lead, agreed, adding, “I'm a big fan of Dojo projects and the Dojo Foundation. I am excited and honored to work alongside such capable, talented developers and I look forward to discovering what we can achieve together.”

“Some of the most innovative developer ideas are coming out of the JavaScript community and our clients see a great deal of value from it," said Todd Moore, Vice President IBM Open Technology. “We are excited to see the jQuery Foundation and the Dojo Foundation joining forces in an open collaborative developer oriented environment.”​

Said James Burke, Project Lead for RequireJS, “I have contributed to projects that have been under both Foundations, and I appreciate how both make it easy for people to start contributing in a welcoming environment by keeping the legal and mechanical processes as low-friction as possible. Both Foundations are also committed to creating maximally-useful code through very permissive Open Source means. By combining their efforts, I believe it will be easier for new projects to choose this successful approach.”

John-David Dalton, Lo-Dash project lead, added, “Combining the resources of the Dojo and jQuery Foundations is a win for developers. Among the many advantages this merger will bring, consolidating CLAs and streamlining processes will make it much easier for projects to grow and better serve the application developer community.”

With this merger, the jQuery Foundation continues to move toward its mission to make the web accessible to everyone. By adding the projects of the Dojo Foundation to the family of projects it supports, the Foundation is able to reach a larger community of developers in its efforts to increase diversity and accessibility in its projects and the open web as a whole. This is just the first major step in the jQuery Foundation’s plans to further serve developers.

About jQuery Foundation
Created in 2012, the jQuery Foundation is a 501(c)(6) non-profit organization dedicated to supporting the needs of web developers. The jQuery Foundation advocates for developer issues in the web standards process and through its memberships in the World Wide Web Consortium (W3C) and ECMA TC39 (JavaScript). It also collaborates with key companies in the industry, such as service providers, browser makers, and framework developers, to improve the web development process.

The Foundation provides development support, documentation and developer education for popular libraries such as jQuery, which is used by more than half of the top one million web sites.

Projects hosted by the jQuery Foundation are open source with liberal licensing, free to use without ever having to worry about royalties. The Foundation encourages the adoption of open standards and implements tools to help developers apply those standards. Foundation projects aspire to give everyone, regardless of their circumstances, access to the web. For more information, visit http://jquery.org.

About The Dojo Foundation
The Dojo Foundation is a 501(c)(6) non-profit foundation created in 2005, dedicated to creating a level playing field for the development of new Open Web technologies. The Dojo Foundation hosts a growing number of projects including the Dojo Toolkit, Lo-Dash, Grunt, Intern, RequireJS, and Tessel. The Foundation has received code contributions from over 1000 individuals and 200 corporations worldwide. Online at http://dojofoundation.org/ .