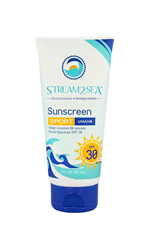 All products in the Stream2Sea line passed an extensive series of tests before formulations were approved.

After nearly a year of testing, a new line of ‘EcoConscious’ sunscreen and skincare products makes its debut from Stream2Sea. “We honestly didn’t expect it to take this long, but it was more important to get it right than to move quickly,” notes Autumn Blum, founder and chief formulator for the new company (http://www.Stream2Sea.com). All products in the Stream2Sea line passed an extensive series of tests – ranging from the microscopic C. elegans and freshwater fish to sensitive coral larvae in the Florida Keys – before formulations were approved.

“This is really ground-breaking research,” said Dr. Denise Flaherty, the biology professor at Eckerd College who led the first round of testing. “The first thing we did was an extensive literature search and discovered that there were very few rules on testing skincare products for aquatic toxicity.”

The next series of tests focused on vulnerable coral larva collected at Mote Marine Laboratory’s Tropical Research Station on Summerland Key under the direction of Dr. Koty Sharp. “For many years, we’ve been collaborating with Smithsonian Institution researchers to identify why coral larvae select one substrate or another – and some of them are very picky,” Sharp said. “We’ve learned that even a very low concentration of some chemicals can influence bacterial metabolism on these surfaces, and that bacterial communities on reefs directly impact the survival of coral larvae.”

Researchers already knew that some sunscreen ingredients, particularly the often-used benzophenone-2, or BP-2, are highly toxic to corals but even ingredients considered to be safe can impact an aquatic ecosystem. “Our first formulations used ingredients that met Whole Foods premium standards, but they still killed tanks full of fish,” Blum said.

And while aquatic toxicity is a particular concern to divers, fishermen and surfers, sunscreen ingredients are also important even for people who never enter the water. “Besides the known health risks to our own bodies, BP-2 isn’t removed in a typical wastewater treatment plant so it eventually ends up in our coastal waters,” Blum said. “Most people would never intentionally harm a coral reef, but we want people to really look at what they’re using on their bodies, and how that affects the waters they play in, on, under or near.”

Stream2Sea has set a new standard for EcoConscious sunscreen and skincare. Along with standard human safety and SPF tests, Stream2Sea products are proven to be biodegradable in both salt and fresh water. They also successfully passed the most comprehensive series of aquatic toxicity tests documented in literature. Formulated with powerful antioxidant blends to protect skin from sun damage, Stream2Sea products include sunscreens, conditioning shampoo and body wash, leave-in conditioner, nourishing body lotion and lip balms. Stream2Sea products are currently available online at http://www.Stream2Sea.com or ask for them at your favorite health food store, dive shop or outdoor retailer, friend us on Facebook or call (866) 960-9513.