Celebrating the "People of Manufacturing", nominations are now open for our second annual awards program, designed to highlight individual and team accomplishments by Georgia manufacturing professionals. The awards presentation will be held during the GMA Summit on November 18th. 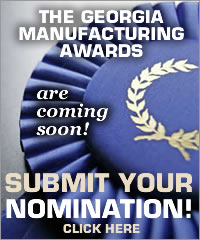 Nominations are now open for the "People of Manufacturing Awards"

The 2015 awards categories are:

To learn more about how you can recognize some of your top performers, visit the awards site at http://www.georgiamanufacturingawards.com

Nominations are being accepted now through September 30, 2015. All nominees will be recognized for their contribution to your organization and three finalists from each category will be invited to attend the Georgia Manufacturing Summit on November 18th, where the winning individuals and teams will be named. Support Georgia manufacturing and those that contribute to its success – Nominate your employees who have made significant contributions to your organization’s success!