This three-disc compilation features must-have music of the 'uplifting trance' sub-genre and it celebrates the FSOE400 world tour, wrapping with a grand finale spectacle on September 11th at the great pyramids of Giza in Egypt. 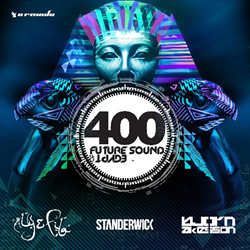 This three-disc compilation celebrates the FSOE400 world tour, with a grand finale show on September 11th at the great pyramids of Giza in Egypt.

Since its inception in 2006, The Future Sound of Egypt brand has been at the forefront of the trance music genre and has had great influence on the growth of the scene as a whole. Year after year, the FSOE radio show, record label and branded event has grown stronger and it is currently one of the more recognizable names within the genre.

Aly & Fila have stayed true to their roots from the beginning and their professional success over the past nine years is proof of the genre's popularity. The FSOE weekly radio show has featured some of the best music from varied artists over the years as Aly & Fila continue discovering and cultivating new talent.

When the Future Sound of Egypt radio show was first introduced, it was broadcast on DI.FM weekly. Today, the show is featured on more than 50 FM/terrestrial, satellite and Internet radio stations worldwide. Live DJ shows celebrate significant episodes of the FSOE radio show, and since the events went international in 2013, thousands of music-lovers have flooded the dancefloors of these events in ever growing numbers.

The live FSOE radio broadcasts -- originating from the FSOE live events -- have given trance music fans from all corners of the globe the opportunity to connect with one another in real-time.

Key tracks on the FSOE400 compilation include:

This is the Future Sound of Egypt.