The Next Generation of Opera Headliners 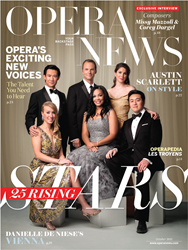 The October issue of OPERA NEWS, which has the largest circulation of any classical music magazine in the United States, hits newsstands on September 18th featuring profiles of 25 brilliant young singers. Dispelling any doubts about opera’s status as a global art form, these Rising Stars hail from all over the world, with hometowns ranging from Appleton, Wisconsin to Ningbo, China.

Editor in chief F. Paul Driscoll and features editor Brian Kellow created the ultimate list of opera’s next generation of headliners. OPERA NEWS has long been celebrated for its impressive ability to identify important new artists in the magazine’s monthly “Sound Bites” feature. The work of the October 2015 issue’s Rising Stars in prestigious competitions, conservatories and young-artist programs has already won them attention. The next step: knocking the doors off theaters around the world with their talent.

“Acceptance into a young-artist program or a competition victory is not a guarantee of an important career,” said F. Paul Driscoll. “We believe that these 25 Rising Stars have the potential for international success. We hope that they will flourish in seasons to come and look forward to watching their progress.”

The Rising Stars issue is the magazine’s second since its redesign debut in September. OPERA NEWS now reflects a wider range of the publication’s audiences’ interests and included a sleek new logo and layout, a revamp of editorial mainstays, as well as new editorial features including:

The October issue of OPERA NEWS is available as a digital edition on September 11th and on newsstands September 18th. For a copy of the magazine, more information on the issue or to schedule an interview with F. Paul Driscoll, please contact Suzanne Byowitz at The Rosen Group, 646.695.7049 or suzanne(at)rosengrouppr.com.

About OPERA NEWS:
OPERA NEWS has been published by the Metropolitan Opera Guild since 1936; it has the largest circulation of any classical music magazine in the United States and is the only publication that covers opera internationally. Editor in Chief F. Paul Driscoll helms the monthly, which is a winner of four ASCAP-Deems Taylor Awards for excellence in music journalism. For more information and the latest opera news visit operanews.com, facebook.com/operanews, twitter.com/operanews and instagram.com/opera_news/.