The Bob Bonis Archive is the largest treasure trove of early photographs of The Beatles and Rolling Stones, many never-before-seen. These rarely exhibited photographs will be available for viewing and purchase at Andaz West Hollywood, previewing on September 15 & 16. 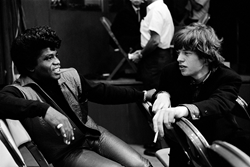 Scene of classic rock and roll parties, Andaz West Hollywood hosts historic exhibition of rare early photographs of The Beatles and The Rolling Stones from The Bob Bonis Archive

Andaz West Hollywood announces the upcoming exhibition of rare photographs from The Bob Bonis Archive, in association with Gallery Schuster of Berlin. On display will be a collection of limited edition photographs by Bob Bonis, former US Tour Manager of the Rolling Stones and The Beatles during their first tours of America, featuring intimate and unguarded photos of both groups, many previously unseen. The photographs will be on display at Andaz West Hollywood September 15 through December as part of the hotel’s rotating art program.

Curated from a cache of 5,000 mostly unpublished photographs, the Bob Bonis Archive contains uniquely personal photographs of the Rolling Stones and The Beatles taken between 1964 and 1966. Kept private by Bonis, who passed away in 1992, the photos were uncovered by his son Alex nearly 50 years after they were taken, and were first made available for public purchase in early 2015 as limited edition, Grammy Museum-certified, fine-art prints. Select photographs will be available for purchase for a limited time at Andaz West Hollywood.

“Andaz West Hollywood has a long rock and roll history on The Sunset Strip. Some of the most legendary rock parties happened here. Most notably, Keith Richards famously hurled a television onto the Sunset Strip. We try to honor that history and carry on that energy in the hotel today,” said Andaz West Hollywood General Manager Lin Schatz. “We are thrilled to unveil the Bob Bonis Archive as our next exhibition. These rare photographs give a unique look into the lives of the world’s two most iconic bands and have the power to transport the viewer back into the Golden Age of Rock.”

“Teaming with the legendary rock and roll pedigree of the Andaz allows us to open up the work to visitors from all around the world – people who also love and appreciate a time when rock stars ruled the world. Now, through the Archive’s unique “Art Accessibility” platform, collectors and fans alike can own rare, limited edition pieces from that time and get a glimpse what of the Archive has to offer, via the Andaz West Hollywood exhibition,” said Larry Marion, curator of the Bob Bonis Archive. Kurt Benjamin, a managing partner of Rare Photo Archives, which represents The Bob Bonis Archive, added: “These photographs capture the most important period, The British Invasion, heralded by the arrival in America of the two most important bands in rock history.”

Find out more about the archive and where to purchase the photographs at http://www.BobBonis.com.

About Andaz West Hollywood
An iconic Los Angeles hotel once referred to colloquially as the Riot House for its rock & roll parties hosted by the likes of Led Zeppelin, The Who and The Rolling Stones, Andaz West Hollywood has evolved into a sexy urban oasis with a touch of vintage glamour. The modern boutique hotel is nestled between the Hollywood Hills and the world famous Sunset Strip and features complimentary amenities such as wifi, non-alcoholic minibar, and an Andaz Lounge offering complimentary morning coffee and wine tasting each evening. The hotel boasts Los Angeles’ highest rooftop pool; Riot House Restaurant & Bar; and creative event spaces fit for small meetings as well as large weddings. http://www.westhollywood.andaz.com

About The Bob Bonis Archive
The Bob Bonis Archive is considered one of the most important photographic discoveries in the world of rock music. From 1964 through 1966, Bob Bonis was the American Tour Manager for both The Beatles and Rolling Stones, accompanying both bands on their historic U.S. tours – coming to and conquering America, and heralding The British Invasion.

During his career, Bonis shot more than 5,000 photographs of the most legendary acts in music history including: 2,700 Rolling Stones photos, 800 Beatles photos, plus an eclectic mix of images encompassing Frank Sinatra, The Lovin’ Spoonful, Simon & Garfunkel, Chicago, Cream, The Hollies, Peter and Gordon and many of the jazz greats with whom he worked over the years.

Most of these recently discovered photographs have never before been published, made available for purchase, or ever even seen by fans and collectors. Bob Bonis’ contribution to rock history is a magnificent collection of more than 3,500 historic photographs of two of the greatest bands in the world – The Rolling Stones and The Beatles.

The unguarded and personal nature of these images reflect Bonis’ close friendship with the bands and offers a private, behind-the-scenes look into the early days of the historic British Invasion era of rock and roll.
The Bob Bonis Archive has partnered with Rare Photo Archives to present, for the first time, the images of Bob Bonis as limited edition fine art prints, each hand numbered, embossed with the Bob Bonis Estate seal, and accompanied with a Certificate of Authenticity from The GRAMMY Museum at L.A. Live, and to make these images available for sale to fans and collectors around the world.