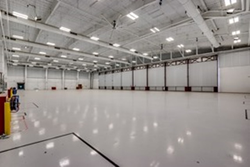 Given our success, expanding further into Arizona was the natural next step for our company and we are thrilled with the properties we have seen and purchased thus far. I’m continually optimistic on the momentum of the Phoenix market.

Theory R Properties, a premier West Coast Real Estate company, has set themselves at the top of the crowd with over $20 million in recent acquisitions. Building on their success in California, in 2012 Theory R expanded into Arizona and established an office at the Scottsdale Airport where they are now the largest owner of Aviation Real Estate.

CEO Joe Daichendt says: “Given our success, expanding further into Arizona was the natural next step for our company and we are thrilled with the properties we have seen and purchased thus far. I’m continually optimistic on the momentum of the Phoenix market.”

Working closely with Mike Milic at Colliers International, Joe closed the four transactions within six weeks. Included in the recent sales are four properties: Facilitec Headquarters in Phoenix, a large restaurant acquisition near the Scottsdale Quarter, Southwest Jet Center at Mesa-Gateway and The Corner Shopping Center in North Scottsdale.

“Joe is easy to work with and has purchased and turned around many failed properties. What’s unique about him and his company is that they continue to own most of these properties decades later. They are not your typical turn and burn type of investor. Theory R is going to go far in the Phoenix area and we hope to work with them in the near future.”
–Mike Milic, Colliers International

The PHX Design Center is a dazzling building constructed of modern glass and steel with over 64,000 square feet. It has a custom designed interior for Facilitec, a workspace solutions company that plans to stay in the building and attached warehouse for many years.

The restaurant acquisition near Scottsdale Quarter is an upscale restaurant space with outdoor space including a pool and several cabanas. The restaurant is over 10,000 square feet of interior space with large patios and is currently being remodeled. Before the sale ever concluded, Joe Daichendt was successful with brokering a transaction that will bring a in a world class restaurant operator that will soon be announced

Southwest Jet Center | Mesa-Gateway is a state-of-the-art aviation facility with two 25,000 square foot hangars attached to upscale office space. The property sits on the runway at the Mesa Gateway airport and has a total of 73,826 square feet. Immediately after the acquisition, the West portion of the property was leased to N1 Engines, a turbine engine parts company.

Lastly, The Corner Shopping Center is a vibrant shopping center in North Scottsdale within the Airpark.

Theory R has a stellar track record in investing and is continually looking for additional investments in the Phoenix and Southern California markets.

Theory R was founded in 2002 by Gary Daichendt, the former Executive Vice President of Worldwide Operations for Cisco Systems Inc. Theory R operates with a high level of integrity and the constant reminder to “do what is Right”. Theory R is refreshingly personal to do business with. Find Theory R at: TheoryR.com