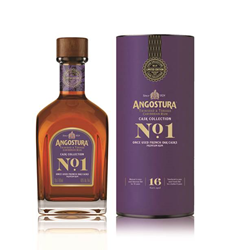 "We're thrilled to share the second edition to the range – No. 1 Once Used French Oak ‐ with rum aficionados and enthusiasts worldwide to show that the craft of rum‐making has no boundaries.” – Master Distiller, John Georges

Known for their iconic bitters and rum‐making heritage, the House of Angostura (http://www.angosturarum.com) ‐ with the only rum distillery in Trinidad today ‐ announces the release of No. 1 Once Used French Oak, the second edition of The Cask Collection – a limited‐edition range dedicated to rums aged in special casks.

“The Cask Collection limited edition range is a celebration of the House of Angostura's rich heritage and artistry in blending some of the world’s finest rums. We're thrilled to share the second edition to the range – No. 1 Once Used French Oak ‐ with rum aficionados and enthusiasts worldwide to show that the craft of rum‐making has no boundaries.” – Master Distiller, John Georges

Bottled at 40% and the first Angostura rum finished in French oak casks, No. 1 Once Used French Oak is an exquisite, silky smooth complex blend – created with a fusion of techniques learnt from the Old World and perfected in the New World. Only 15,030 bottles will be available in Europe, the Caribbean, Australia and the USA in autumn 2015.

The No. 1 name conveys the spirit of the rum being one‐of‐a‐kind. Each limited edition introduced into the range offers the recipient a joyous experience, one that can’t be replicated after the bottles have been sold. For this reason, The House of Angostura has chosen to name every new release No. 1, paired with a sub‐title that states the special cask used to mature the blends.

No. 1 Once Used French Oak is a 16 year old blend. The rums were aged for a minimum of 10 years in American Oak casks. The rums were then artfully combined by The House of Angostura’s Master Blender and re‐casked into carefully selected French Oak casks that were once used for aging cognac. The rum was left to mature for additional 6 years in the French Oak casks. The French Oak barrels infuse the luxurious oak‐driven flavours of nuts, dried fruit such as dates and figs with subtle floral qualities.

“The overwhelming response we received to the first No. 1 released in 2013 was a strong indication of the appetite our consumers have for artisan spirits, which the House of Angostura is passionately committed to offering. No. 1 Once Used French Oak is an outstanding example of the tradition, philosophy and talents of the House of Angostura,” said Genevieve Jodhan, Executive Manager, International Sales & Marketing.

Blending rum is an art ‐ acquired from years of experience. Angostura’s blenders have been trained on original traditions and are celebrated experts who closely maintain guarded formulas and techniques. For No. 1 Once Used French Oak, Angostura produced a one‐of‐a‐kind recipe with mature, high‐quality aged rums ‐ each chosen for their unique flavour and characteristics. The colour is beautiful amber with superb clarity and the aroma offers notes of subtle peach and candied apricot, macadamia or almonds, with hints of oak. The finish is dry with a soft fade.

The Cask Collection is a testament to Don Carlos SIEGERT, son of the brand’s founder, whose vision continues to inspire the House of Angostura’s blenders today.

HOUSE OF ANGOSTURA: A RICH HISTORY
The House of Angostura’s award winning rums are steeped in nearly 200 years of tradition. The journey started in 1824 when founder Dr. Johann Siegert first produced aromatic bitters in Angostura, Venezuela (today called Ciudad Bolivar). In the 1870’s, Dr. Siegert’s three sons migrated to Trinidad, among them Don Carlos Siegert, who pioneered the brand, establishing Angostura Aromatic Bitters as an integral ingredient in premium cocktails and ultimately a mainstay of cocktail culture. The family’s Siegert Bouquet Rum became a Trinidadian tradition up until the early 1960’s and part of the company’s rich rum heritage. In the 1970’s, The House of Angostura expanded, acquiring the Fernandes family distillery, which was founded in the 1890’s by Manuel Fernandes, an immigrant from Portugal, and known for making high quality rums.

HOUSE OF ANGOSTURA: A CELEBRATED APPROACH
The only rum distillery in Trinidad today, Angostura’s signature style stems from techniques that have stood the test of time:

NOTES TO EDITORS
The company exports approximately 85% of its production to destinations in almost every country in the world. The House of Angostura®, distinguished by its excellence, has been recognised over the centuries by the granting of Royal Warrants of Appointment to the royal households of Great Britain, Prussia, Spain and Sweden as suppliers of Angostura aromatic bitters. For a complete list of recent awards and accolades, visit http://www.angostura.com/OurBusiness/Awards.