Orlando-based U.S. Lawns inducts the husband and wife team of Robin and Donna Smith of Asheville, NC into the U.S. Lawns Hall of Fame. 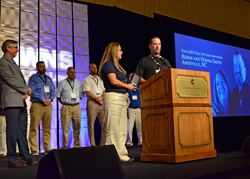 Orlando based U.S. Lawns announced two inductees this year at their Annual Conference at the Gaylord Texan Resort & Convention Center in Grapevine, TX.

Among many other distinguished awards presented at the three-day U.S. Lawns Annual Conference, held at the Gaylord Texan Resort & Convention Center in Grapevine, was their top honor - the U.S. Lawns Hall of Fame.

For the second year in a row, U.S. Lawns selected another husband and wife team, Robin and Donna Smith, for the honor. Ken Hutcheson, President of U.S. Lawns called them to the stage, where they joined past Hall of Fame recipients for handshakes, hugs, and a few tears. Fellow franchisee Phil Gay presented the award to the couple. Robin and Donna Smith, husband and wife franchise owners from Asheville, NC, thanked family, fellow franchisees, and the U.S. Lawns Home Office for their support over the years, citing hard work and the “Power of the Network” for their success.

Asked about his success, Robin commented, “Believe in the training, support and advice that is given from the home office or fellow franchise owners. Build confidence in yourself and your whole team. Provide your customers with quality services and support they need for their commercial grounds. And give back to your community by helping the causes you believe in, and you’ll see your business grow.”

The Hall of Fame recognizes franchise owners “for outstanding and unselfish contributions to the success and growth of U.S. Lawns.” This recognition is awarded to a franchise business operator who consistently contributes their time, talents and spirit to making their franchise business successful, while also inspiring and leading others to achieve success.