Omega Auctions announce the sale of a ring which belonged to Elvis Presley, expected to fetch more than £25,000 when it goes under the hammer next week. 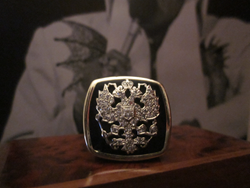 Being an avid Elvis collector, I've had some nice pieces of his jewellery in the past, but most weren't pieces that Elvis would have remembered. The items simply weren't close enough to Elvis. I wanted to own something that was very meaningful to him.

The 14ct gold and diamond ‘Russian Tsar’ claw crest ring was one of Elvis’ most prized possessions and he can be seen wearing it in well over a hundred concerts, which combined with the incredible story behind its path to auction, will see it attract significant interest from fans and collectors worldwide.

The ring originally belonged to Elvis' father, Vernon Presley, before giving it to his son, who remarkably would later give it to a fan. Some two weeks before Elvis was due to perform in Mobile Alabama on August 29th 1976, local man Tommy Milham was first in line to buy tickets at the Municipal Auditorium, where he took his place early in the evening and stayed in line all night until the doors opened in the morning. The same evening the staff from the Mobile press came out and interviewed him for the newspaper reporting how he waited in line with hot drinks, lunch and a portable chair to sleep on. Mr Milham sat in the front row for the concert and when Elvis spotted him waving the newspaper with the headline 'First In Line With Patience' , Elvis approached him and took the newspaper. He read the headline, and thanked the fan by asking if he'd like a scarf. Mr Milham pointed at the huge ring Elvis was wearing and shouted "No, I want that ring!" Elvis told him that he couldn't give his ring away and handed him a scarf instead. Mr Milham shouted again, demanding the ring. Elvis finally shrugged his shoulders and with an embarrassed look he slipped the ring from his finger and handed it to Mr Milham. The incredible gesture made the New York Times, some television coverage too and years later the story appeared in Becky Yancey's book My Life With Elvis.

The current owner, who bought the ring from Mr Milham in 2004 recalls "Being an avid Elvis collector, I've had some nice pieces of his jewellery in the past, but most weren't pieces that Elvis would have remembered. The items simply weren't close enough to Elvis for me and I wanted to own something that was very meaningful to him, something that he loved and something he knew extremely well. Unfortunately due to personal health issues, the time has now come for me to sell it on. My only hope is that it goes to a true fan."

Auctioneer Paul Fairweather states “This is such a unique piece of Elvis’ memorabilia with unquestionable provenance. I expect it will achieve a considerable sum.”

Also in the sale is an early Hamilton digital watch which belonged to Elvis and was later bought by the Daily Mirror to be offered as a competition prize back in 1994. The watch is expected to sell for over £7,000.