Loopy Will ‘Stop the Drop’ with Innovative Loopy Cases, Providing One-Handed Control of the Most Popular Smartphones

Launching on Kickstarter, Loopy eliminates the need for bulky protective cases and prevents smartphone drops. Loopy cases combine a stylish thin outer case with a patented versatile design allowing users to handle keys, the dog’s leash, sunglasses, even a baby…all without risk of dropping their smartphone. 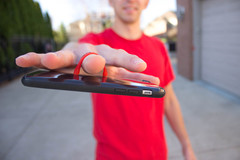 Most cases are reactive, meaning they react to protect during a drop. Loopy is proactive, meaning it 'stops the drop' from ever happening in the first place.

Loopy Cases, the revolutionary cases that allow for one-handed smartphone use while preventing drops, today launched its crowdfunding campaign on Kickstarter.

Loopy is pioneering a new category: proactive protection. The slim designed case eliminates the need for unnecessary bulk and still keeps phones protected. It’s the answer for anyone who has ever dropped their expensive phone because their hands were full or slippery - something that happens all too often. Every two seconds a smartphone breaks in the U.S.

Loopy also makes using the new larger iPhones one-handed possible again, both comfortably and confidently. In addition to comfy and secure reach of the entire screen, Loopy also frees up an extra hand when needed by being a multitask guru with its ‘multi-grasp' function.

“Most cases are reactive, meaning they react to protect during a drop,” JT Wangercyn, co-founder of Loopy. “Loopy is proactive, meaning it 'stops the drop' from ever happening in the first place.”

Loopy cases were developed by the Wangercyn brothers after a 2012 incident left them looking for a better way to protect smartphones.

“Back in 2012, my Dad dropped his brand new iPhone 4 and broke his screen the same day he upgraded,” said JT Wangercyn, co-founder of Loopy. “After he paid over $100 in repairs, we knew there had to be a better way.”

The Wangercyn brothers have been studying and developing cases for three years and finally landed on the perfect design after not being totally satisfied with their previous two iterations. Their mission is simple; StoptheDrop™ and user reviews prove Loopy Cases work.

The goal of the Loopy Case is to maximize efficiency and convenience while protecting devices at competitive pricing versus the costly and less effective cases on the market. The loop is placed around one finger so the user can grab virtually anything with no fear of dropping the phone.

The loop itself is made of a special blend of silicone rubber that collapses smoothly making it quickly pocketable, convenient and practical. The friction of the loop against fabric keeps a phone from slipping out, the way millions of phones have met their demise. Loops are strong and secure, withstanding up to 10 pounds of pull. Loopy cases can also be laid sideways and the loop becomes a kickstand for watching videos.

Loopy Cases start at $35 on Kickstarter with early bird specials also available for a greater discount.

About Loopy Cases
LoopyCases® are the world’s first phone cases that prevent accidental drops. The patented design features a finger loop that not only proactively protects against costly smartphone drops, but also allows for easy one-handed use of even the biggest screens. Loopy is 1st place winner of two entrepreneurship competitions and has garnered a 96% satisfaction rating. The team consists of JT, Jim, and Joey Wangercyn, three brothers from IU and Purdue University, who stumbled upon the idea for Loopy after a family member broke their phone.