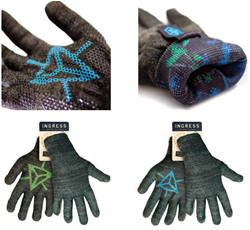 "Ingress is a unique and exciting mobile game that people play year round. In order to play their best, Ingress participants need to gear up with the proper equipment. And in wintertime, that includes touchscreen gloves," Scott Henderson, Glider Gloves.

Glider Gloves is thrilled to announce its latest partnership with Niantic, the creator of the outdoor real-world mobile game called Ingress. Special Ingress Edition touchscreen gloves have been exclusively designed for fans and players of this fascinating game.

Ingress, which is now available on Android and iOS devices, uses its astonishing geo-location technology to transform the conventional world into a global gaming arena played by millions in over 200 countries and territories. Focused on territorial control, players of all ages become "Agents" for one of two factions; the Resistance or the Enlightened. Agents must physically visit various "Portals" (landmarks around the world) and either embrace or defend against a mysterious energy discovered by a team of scientists in Europe.

"Ingress is a unique and exciting mobile game that people play year round," says Scott Henderson, Partner and PR Communications Director at Glider Gloves. "In order to play their best, Ingress participants need to gear up with the proper equipment. And in wintertime, that includes touchscreen gloves."

Ingress Edition Glider Gloves have all the features of regular Glider Gloves, including full-touch response, warmth, protection and anti-slip grips. Plus, these touchscreen-friendly gloves designed especially for Ingress Agents offer the Faction logo grip on the palm (either Resistance or Enlightened), an enhanced cuff with city grid inner lining and a convenient, faction-branded screen cleaning tag.

About Glider Gloves
Launched in 2010, Glider Gloves is an innovative Canadian company that manufactures and sells connective touchscreen gloves. Combining full touch response, with warmth, protection and anti-slip grip functionality, Glider Gloves maintain full connectivity between your hands and the touchscreen, while providing the protection you need from even the harshest of outdoor elements. For more information on Glider Gloves, please visit http://www.glidergloves.com

About Niantic, Inc.
Niantic, Inc. builds real world experiences that foster fun, exploration, discovery and social interaction. Originally incubated within Google, Niantic was founded by John Hanke, who previously helmed the Google Geo team (including Google Maps and Google Earth) after his start-up Keyhole was acquired by Google. The company’s real-world adventure game Ingress has been downloaded more than 12 million times and is played in more than 200 countries and territories worldwide. For more information on Niantic, please visit http://www.nianticlabs.com.