Ovation PR & Advertising says Mrs. Stafford is the perfect role model for the Domestic Violence and Sexual Assault Council. She is a strong advocate for those who are survivors. 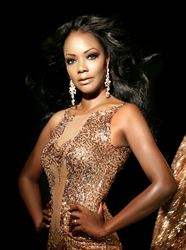 Khnuma Simmonds-Esannason, executive director of DVSAC, said, “I am pleased that Mrs. Stafford chose DVSAC to expand on her mission of raising awareness and breaking the silence on family violence."

The Virgin Islands Domestic Violence and Sexual Assault Council (DVSAC) has announced its collaboration with Mrs. USVI Globe, Tracie Stafford who is promoting Domestic Violence Awareness Month (DVAM) activities and prevention education initiatives throughout the U.S. Virgin Islands. Stafford, who is a third generation domestic violence survivor, has joined DVSAC in providing workshops on her journey from a past of poverty, domestic violence, child abuse and sexual assault, to a life of love, joy and limitless possibility.

Khnuma Simmonds-Esannason, executive director of DVSAC, said, “I am pleased that Mrs. Stafford chose DVSAC to expand on her mission of raising awareness and breaking the silence on family violence. Mrs. Stafford’s desire to utilize her platform to support our cause territorially and recognize Domestic Violence Awareness Month speaks volumes to her courage, strength and ability to empower survivors and the overall community.”

Stafford spoke at the DVSAC annual DVAM workshop and the University Campus in St. Croix on Tuesday and spent today interviewing with local radio and TV shows.

"It has been an honor and a privileged to share my message with the beautiful people of the US Virgin Islands." Stafford began, "It is important to understand that survivor is not the end game, it is the beginning of the healing."

October 9: St. John
-Meet and Greet. One on One Conversation with Mrs. USVI Globe (time and location to be announced)

The Virgin Islands Domestic Violence and Sexual Assault Council is recognized as the Territorial Coalition by the Office of Violence Against Women and the Family Violence Prevention Services Act. DVSAC aims to promote healthy relationships within the V.I. community by coordinating education and awareness resources that advocate for the elimination of domestic violence, sexual assault, stalking and dating violence in the territory.

The Mrs. Globe pageant is one of the most recognized and celebrated pageants for married women in the world. All proceeds from Mrs. Globe benefit the Women In Need Foundation which provides tools of recovery to women who have been negatively impacted by abuse. For more information visit MrsGlobe.com and WINFoundationInternational.org

For more information on Mrs. USVI Globe Domestic Violence Awareness Month activities in the US Virgin Islands or other DVSAC initiatives, call 719-0144 or e-mail info@vidvsac.net. ‘Like Us’ at http://www.facebook.com/vi.dvsac and keep posted on daily updates.