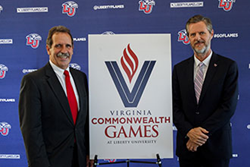 Next summer, Liberty University will begin a five-year contract to host the Virginia Commonwealth Games and become the annual event’s title sponsor, as announced during a press conference held Wednesday afternoon in the Williams Stadium Club Pavilion.

“I don’t believe we could have found a better title sponsor than Liberty University,” said Pete Lampman, president of Virginia Amateur Sports, based in Roanoke where the Games have been held since 1990. “Thank you for giving us this opportunity to provide our athletes the chance to compete at a Division I school and empowering them to dream big. I am proud to take this opportunity to announce that the 2016-2020 games will be officially known, from today forward, as the Virginia Commonwealth Games presented by Liberty University.”

More than 225,000 athletes have participated in the summer event since the first games started, making it the largest multi-sport festival held in Virginia each year. As many as 10,000 athletes compete annually. More than 9,000 participated in 53 distinct sports in this past summer’s 26th annual Games, when Liberty Softball Head Coach Dot Richardson served as the Olympic Speaker.

“State games were modeled after the Olympic Games, with the state games providing a motivational goal for all athletes within their state in which they are organized,” Lampman said. “Virginia Commonwealth Games, presented by Liberty University, will continue to show the traditional values and traditions of the Olympics by awarding gold, silver, and bronze medals to the winners, the holding of opening ceremonies and lighting of the torch.”

“We are so excited about this new partnership with Virginia Amateur Sports and the City of Lynchburg,” Falwell said. “We’ve spent the last decade building (Liberty’s) athletic and recreational facilities. We wanted to find a way to share these facilities with the local community, with the state and not keep them to ourselves … and thought this was the perfect opportunity to bring these games to Lynchburg, to share our facilities with the Commonwealth Games and with the general public. So thank you for working with us to make it a reality.”

Lynchburg Vice Mayor Cesar Johnson thanked President Falwell for “having the vision and willingness to become a partner in this venture.

“With world-class facilities, Liberty University is a perfect fit for athletes, officials, parents, and fans to come enjoy the Games (as they move) from the Star City to the Hill City,” he said.

Falwell said the university’s central location in the state and its athletic, residential, and dining facilities, which are ranked among the best in the country, will allow Liberty to accommodate athletes and visitors.

Lampman expects the move to be a smooth one, with volunteer and athlete participation continuing to swell.

“We’ve got our work cut out for us, but we’re looking forward to it,” he said. “The first year, we may maintain levels of participation. In the future, it’s going to start increasing more and more, exponentially.”

Liberty is already the host location for two events offered in the 2015 Games. On Sept. 13, the Liberty Mountain Skate Park held the skateboarding contest and on Oct. 17, the Liberty Mountain Snowflex Centre will hold the ski and snowboard rail competition. The opening ceremonies for the 2016 Commonwealth Games and the main weekend of competition will take place July 22-24.

The Commonwealth Games are the second major summer athletic event to relocate its base of operations to Lynchburg in recent years. In 2013, the Virginia High School Coaches Association Senior All-Star Games moved to Lynchburg from Hampton Roads, after a 20-year tie to that area. A majority of those contests, including football, basketball, and volleyball, have taken place in Liberty Athletics facilities.

Liberty University, founded in 1971, is the largest private, nonprofit university in the nation, the largest university in Virginia, and the largest Christian university in the world. Located near the Blue Ridge Mountains on more than 7,000 acres in Lynchburg, Va., Liberty offers more than 450 unique programs of study from the associate to the doctoral level. More than 200 programs are offered online. Liberty’s mission is to train Champions for Christ with the values, knowledge, and skills essential for impacting tomorrow’s world.

The new logo for the Virginia Commonwealth Games, presented by Liberty University, was revealed on Wednesday, Oct. 7, 2015.