Stock Certificate Signed by Warren Buffett to be Auctioned by HWPH AG on October 17, 2015

HWPH AG, a leading auction house for Scripophily (the collecting of old stock and bond certificates), announces today that it will auction a 1956 stock certificate issued by the Graham Newman Corporation and signed by history’s greatest stock-picker Warren Buffett. 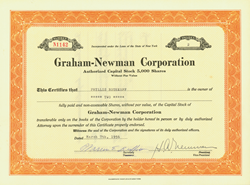 This stock certificate is one of the outstanding items of the 20th century.

HWPH AG, a leading auction house for Scripophily (the collecting of old stock and bond certificates), announces today that it will auction a 1956 stock certificate issued by the Graham Newman Corporation and signed by history’s greatest stock-picker Warren Buffett. The auction will take place in Wiesbaden, Germany, on 17 October 2015. Interested bidders can bid online in real time via http://hwph.infinitebidding.com/ The Buffett item will be auctioned as Lot 512 and has a minimum bid of 5,000 Euros.

Buffett received a Master’s Degree in Economics in 1951, after studying at the Wharton School (University of Pennsylvania), University of Nebraska and Columbia University. At Columbia University Buffet studied under Benjamin Graham, the father of fundamental stock analysis. After working at his father’s firm, Buffett-Falk & Company, Buffett accepted an offer from Graham, his former professor. He started at Graham-Newman Corporation in 1954, and it was in 1956, the year Graham retired, that Buffett signed the Graham Newman Corporation stock certificate now offered for sale.

At the age of 25, Buffett founded his own Buffett Partnership in Omaha on 1 May 1956. He started with an initial investment of US-$ 100 and an additional US-$ 105,000 from seven relatives and acquaintances. He achieved annual returns of 29.5 per cent between 1956 and 1969, at which time he liquidated the investment pool. He then offered his partners the opportunity to switch their money into shares of Berkshire Hathaway at US-$ 43 per share, using the former textile company as a holding company for his investments. Buffett bought large stakes in Coca-Cola, American Express and Gillette in the following years and many companies were taken over completely. Buffett bought undervalued, but long-term lucrative stocks. With this approach he managed to raise the stock price of Berkshire Hathaway up to approximately US-$ 200,000, yielding an amazing annual return of 20.2 per cent!

Included with the certificate is a letter to the daughter of the original shareholder, dated 12 October 2012. Buffett writes: “You have a wonderful collector’s item in the Graham-Newman certificate, but I’m afraid it has no intrinsic value.“ The letter is signed by Warren E. Buffett. “This stock certificate is one of the outstanding items of the 20th century,” explains auctioneer Matthias Schmitt. “It bears the original signature of the most successful investor of all time and was issued during the very early years of his phenomenal carrier! This historic certificate is the only one known to us,” declares Schmitt.

About Scripophily: Scripophily is the hobby of collecting old stock and bond certificates. The hobby started in the 1970’s and has grown steadily in popularity.

About HWPH AG: HWPH AG was founded in 2001. It is one of the leading auction houses and organizes two major auctions for stocks and bonds every year.