Obama's Odyssey Educates: 2 New Volumes Entertain and Inform about 2008 Race on the Eve of 2016 Presidential Campaign

Yahoo's Content Producer of the Year for Politics (2008, 3 million hits) entertains, informs and amuses, giving the reader 100 photos and detailing a fascinating 18-month roller coaster ride leading to the 2008 election for the White House, with additional implications for the 2016 campaign. 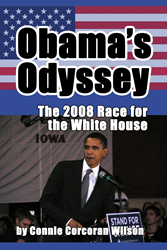 Obama's Odyssey: The 2008 Race for the White House (Vol. I, Caucus to Convention)

Obama's Odyssey, a citizen-journalist's 18 months of reports from the field on the presidential race of 2008, is available in paperback and e-book formats just as Vice President Joseph Biden ponders a 2016 presidential run. The two new volumes, composed of a cross-section of representative articles pulled from an archive of more than 1,000 filed by Yahoo's Content Producer of the Year from the field, were hit 3 million times by readers who enjoyed Wilson's lighthearted treatment of unfolding events as she reported from inside the DNC, the RNC, the Ron Paul Rally for America, the Town Hall meetings of 2008 or as she blogged "live" all night from Grant Park after the Pennsylvania Primary sealed the deal for Obama. This is the unseen and little-reported side of the campaign that lets you know what was really going on in the streets of St. Paul and Denver and elsewhere, reported by an average citizen who was in the midst of it all. The stories are conveyed with great humor, whether the adventure involves taking the Closeted Gay Republican Tour Bus trip in St. Paul or listening to Obama accept his party's nomination in Invesco Field.

With some of the "usual suspects" running again in 2016 (Hillary, Biden?, Huckabee, Santorum), the insights and quotes are still very relevant, especially in regards to how average voters viewed the candidates. The nearly 100 photographs in the book add to the reader's knowledge and enjoyment.

Connie (Corcoran) Wilson, a University of Iowa graduate, writer for 5 newspapers and 17 blogs, and author of 30 books, began following presidential politics in 2004 with the Howard Dean campaign, writing for http://www.blogforiowa.com. Although she covers both the Republican and Democratic candidates (tracking the candidates through Iowa on their path to the conventions in Volume I and continuing on from the Conventions to the Inauguration in Volume II), the books' viewpoint is that the 8 preceding years under George W. Bush were disastrous. In the book, Wilson dissects the qualifications of Sarah Palin to be Vice President with wit, including the humorous "Alternative Titles for the Sarah Palin Documentary" (a film which premiered in Pella, Iowa), expanding on a list from the Thursday, May 26, 2011 edition of the Chicago Tribune.

Obama's Odyssey: The 2008 Race for the White House (Vols. I & II) is history served up with a smile. The writer is an educator, journalist and Iowa-born graduate of the University of Iowa who was the Ferner/Hearst Journalism Scholar when she was a student there. For Connie, a retired 63-year-old college professor rooming with twenty-something Yahoo staffers, the pursuit of the story became a personal odyssey. There is an emphasis on the fun and the funny, including one memorable photo of a trout that appears to be attacking Fred Thompson.

As fellow Yahoo Contributor Rose Richmond wrote, "I loved this and can't wait for Wilson's next great project." Chicago lawyer and award-winning journalist and blogger Bonnie McGrath said, "The election of Barack Hussein Obama in 2008 was politically startling. It captured the imagination of a nation in a way that no other political event ever did or ever will.... As his double term as President of the United States comes to an end, there is no better time to reacquaint oneself with Obama's campaign trail, one of the most unbelievable sojourns in American history."

If you are a Progressive, Independent or simply a Democrat with a sense of humor, pick up Volumes I and II of the new two-book set Obama's Odyssey: The 2008 Race for the White House.