In 2007, Cutco sales professional Rachelle De Young donated 19 inches of her own hair to make a wig for Leah Schalow, who had Hodgkin’s Lymphoma. Now in remission, Schalow has paid that gift forward by donating more than a foot of her own hair through the same organization, Michigan-based nonprofit Children with Hairloss. 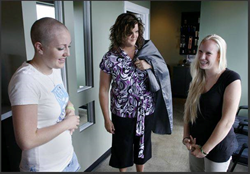 I hope that she continues to selflessly give and that she is blessed by the experiences over and over again, because I know I have been blessed to be a giver.

In 2007, 16-year-old Leah Schalow was living in Grand Rapids, Michigan, and battling Hodgkin’s Lymphoma. Over the summer, she received 19 inches of donated hair to make a wig from fellow high school student Rachelle De Young. It was the first of three donations that Rachelle De Young, now a successful Vector Marketing sales professional, would make over eight years. In total, the philanthropic De Young donated 65 inches of her long, blonde locks to help children with hair loss.

De Young’s initial donation to Leah Schalow turned out to literally be a gift that kept on giving. This summer, Schalow, now in remission, donated more than a foot of her own hair to the South Rockwood, Michigan-based non-profit organization, Children with Hair Loss. It was the same charitable organization that made Schalow’s wig after she was diagnosed with lymphoma. After losing her hair so many years ago, it was amazing to have enough healthy hair to donate to someone else who was suffering, Schalow says. The comfort of a wig can make a big difference to someone who has cancer, she added.

“I wanted to give back in that same selfless way to someone else who is going through an illness,” she said. “It really felt good to be able to donate hair after everything I've been through because not everyone is so lucky and survive their disease—but I was.”

Schalow is now 24 and studying health information technology at Davenport University. She keeps in touch with De Young, who now works for Vector Marketing, the marketing and sales arm of Cutco Cutlery.

“It is so great to see the receiver become the giver,” De Young says. “I hope that she continues to selflessly give and that she is blessed by the experiences over and over again, because I know I have been blessed to be a giver.”

About Vector Marketing:
Vector Marketing is the marketing and sales arm for Cutco Cutlery, a 65-year-old company with headquarters and manufacturing facilities in Olean, New York. Vector sells Cutco through a national team of college students, who are trained to do in-home and virtual demonstrations on a pre-set basis. Vector Marketing has over 200 locations nationwide and works with students of all majors with little-to-no professional experience.