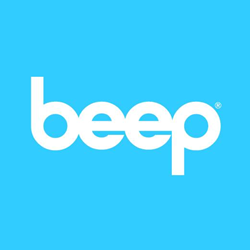 Crowdfunder was founded in 2011 and is now the leading equity funding platform with the mission of bringing capital to early-stage companies like Beep while giving investors access to top deal-flow. Since 2011, the company has engaged with the United States Congress and White House on crowdfunding legislation and regulations. Crowdfunder is also well known for partnering with NBA player Yao Ming for his Yao Family Wines campaign.

“Crowdfunder is a great vehicle for companies like Beep to tell their story and connect with an existing network of over 10,000 accredited individual and institutional investors online,” said Chance Barnett, CEO of Crowdfunder. “We are excited to be a part of this journey with Beep and we look forward to what is in store next for them.”

“Beep is proud to be working with such great partners. Our friends at Personas, MiiScan and Crowdfunder, are creating entirely new ways of doing business and Beep is pleased to be leading the charge alongside them,” said Beep partner Ben Cantin-Kranz. “Our team is developing new ways for everyone to connect with friends, family, and celebrities on smart watches and phones. We’re also excited to be redefining how brands will connect with fans. The future is bright for Beep.”

Since its official launch in October 2014, Beep has reached over 50 million people near and far, from the United States to the Philippines. Thanks to its new partnerships with Crowdfunder and other successful companies like MiiScan and Personas, Beep is expecting to create innovative updates for its app and increase its user base significantly. Beep looks to position itself as a new and more personal social app that could bring its users closer together.

“I was drawn to Beep because it brings the personal, human element to social media,” says Jesse DeCosta of DECOSTA Marketing Inc., Canada’s leading branding manager to Hollywood stars and now Beep’s CEO. “It’s common to send a line of text to a loved one or read about a celebrity in a magazine, but to instantly connect and hear that person’s voice on-the-fly will change everything we know. It's the audio version of Twitter, and the entertainment industry is catching on quick.”

Beep stands out as the social voice app leader thanks to users like Hollywood actor Will Smith. Will Smith chose Beep to personally thank millions of fans for their birthday wishes, and most recently communicating with fans in several different languages.

Beep allows its users to record short voice messages called beeps which can then be sent to a friend, shared openly with the world, or posted on other social networks like Facebook.

Available on the App Store and Play Store, Beep is continuing to grow in popularity. With additional major updates being unveiled, Beep will continue to gain the attention of celebrities and every day social media users alike.