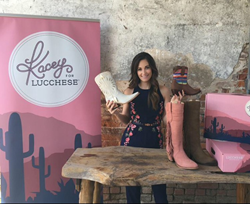 To offer more avenues for consumers to find Kacey for Lucchese, we selected Cavender’s and Country Outfitter as partners because they share our enthusiasm for Kacey and her collection.

“This boot is majorly influenced from a 1950s pair that are my absolute favorite...I probably wear them at every show,” said Kacey. “Also the symbol that has brought me so many reasons to celebrate - the arrow.”

Three new designs round out the collection: Gallop, available in both Dusty Pink and Bridle Brown, offers a tall ride with sassy fringe and Monterrey, a vibrant Western bootie, features a Southwestern-blanket design that encircles the ankle.

For the initial launch, Kacey for Lucchese will be available exclusively at country lifestyle retailer CountryOutfitter.com and select locations of the 50-year-old Western retail chain Cavender’s before expanding to other retailers in the spring.

“We want our customers to enjoy the full Lucchese experience from discovery in-store and online to wearing our boots with pride,” said Cindy Moore, Lucchese’s V.P. of Sales. “To offer more avenues for consumers to find Kacey for Lucchese, we selected Cavender’s and Country Outfitter as partners because they share our enthusiasm for Kacey and her collection.”

Kacey will help Lucchese celebrate the official launch on November 2 at the Nashville Lucchese store two days before she attends the Country Music Award (CMA) ceremony where she’s nominated for three awards, including Female Vocalist of the Year and Album of the Year for Pageant Material.

In addition to CountryOutfitter.com and select Cavender’s locations, the collection can be found at Lucchese retail stores (Houston, Nashville, San Antonio and Santa Fe) and Lucchese.com.

About Kacey Musgraves:
Texas-native and Nashville-based singer/songwriter, Kacey Musgraves released her Mercury Records Nashville debut album, Same Trailer Different Park, in the spring of 2013 to massive critical acclaim and recognition. The album, which she co-produced with Shane McAnally and Luke Laird, debuted at No. 1 on Billboard's Top Country Albums chart making her the first solo female in five years to open at No. 1 with a rookie release, and just seventh in the 22-year Nielson SoundScan era. The gold-certified album includes her top 10, platinum-selling single "Merry Go 'Round" and gold-certified hit “Follow Your Arrow.” Musgraves has taken home the award for "New Artist of the Year" at 2013's CMA Awards and also won two Grammy Awards for Best Country Song (“Merry Go ‘Round”) and Best Country Album (Same Trailer Different Park), the ACM Award for Album of the Year (Same Trailer Different Park), and most recently the 2014 CMA Award for Song of the Year (“Follow Your Arrow”).

Musgraves released her highly anticipated sophomore album, Pageant Material, on June 23rd where it debuted at No. 1 on the Billboard country albums chart and No.3 on the Billboard 200. Kacey co-wrote all tracks on the album and also co-produced teaming up again with Shane McAnally and Luke Laird. Pageant Material includes debut single “Biscuits” and "Dime Store Cowgirl." The album has been met with massive critical acclaim and recognition from press outlets all over the world.

About Lucchese:
Texas-based Lucchese is a legendary bootmaker and iconic brand of the American West. Applying the same craftsmanship principles and techniques since 1883, Lucchese artisans use only the finest leathers, preeminent materials and a proprietary twisted cone last to construct boots of unrivaled quality, fit, comfort and style.