Top-flight European diplomats and businesspersons have come to Brussels for the second business forum in the Belgian capital aimed at highlighting the great range of potential investment opportunities in Azerbaijan. The event was organised by the Benelux office of The European Azerbaijan Society. 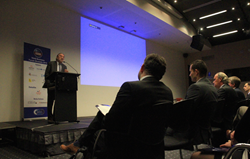 The keynote paper was presented by Herman De Croo, Belgian Minister of State – who has twice experienced the vitality of Azerbaijan

If Azerbaijan is in your head, there will be fire in your heart, enthusiasm in your soul, and dynamism in your body.

On 14 October, more than 100 businesspeople and diplomats from across Europe flocked to the prestigious Diamant Conference and Business Centre, near the diplomatic area of Brussels, for the second Brussels Business Forum to highlight the investment opportunities available in Azerbaijan. Bylined as 'Azerbaijan Through the Eyes of International Investors', the event was organised by the Benelux office of The European Azerbaijan Society (TEAS).

Marc Verwilghen, Director, TEAS Benelux and former Belgian Minister of the Economy, Development Co-operation and Justice, acknowledged: “Europe has a new heart – everyone seems to have discovered the ‘new’ Silk Road for which Azerbaijan will, once again, be the epicentre. Azerbaijan has huge investment potential. The objectives of Azerbaijan, Belgium, the whole of Benelux and the EU are the same. If Azerbaijan is in your head, there will be fire in your heart, enthusiasm in your soul, and dynamism in your body.”

Herman De Croo, Belgian Minister of State and the longest-serving Belgian MP, spoke from his own experience: “I have visited Azerbaijan twice – in 2011 and this year. Between those dates there was enormous change in the infrastructure, and I noticed there has been an ongoing evolution in the receptiveness of the Azerbaijani people to external business investment from Europe. The successful hosting of the European Games in Azerbaijan is indicative of the drive of the authorities to be anchored to Europe.”

H.E. Fuad Isgandarov, Head of the Azerbaijani Mission to the EU and Ambassador to the Kingdom of Belgium and Grand Duchy of Luxembourg explained: “More than 50 per cent of investment in my country comes from EU countries. TEAS is bringing Azerbaijan to the heart of Europe, and that is very constructive. Despite all the challenges, Azerbaijan has demonstrated that its strong will has enabled it to achieve success.”

The focus of the event was on changing preconceptions about Azerbaijan – a country renowned for its oil and gas reserves. James Hogan, Managing Partner, Dentons Baku explained: “We have been active in Azerbaijan for 25 years. Azerbaijani investment policy is very open and, since independence, a stable legal regime has been implemented. This now includes Special Economic Zones, aimed at stimulating diversification of the economy.”

Haji Huseynov, Senior Infrastructure Specialist, World Bank, outlined some of the World Bank-supported projects currently underway in Baku and across Azerbaijan. He said: “The Baku–Tbilisi–Kars (BTK) railway will become functional by the end of this year. The physical infrastructure is already built, and the first train completed its journey in August.”

Axel Enthoven, President, Enthoven Associates – designer of the TGV train – ranks amongst the most renowned Belgian designers of the past four decades. He explained: “In order to develop, mobility is extremely important.” He then outlined the options available for constructing urban and countryside infrastructure, and how the chosen concept can impact the relationship of the population to their country and their quality of life.

Agriculture is one of the predominant industries in Azerbaijan, employing around 40 per cent of the workforce. Home to 11 climatic zones, and blessed with fertile soil conditions, Azerbaijani farmers produce a wide variety of fruit and vegetables. Manuela Traldi, President, Italy–Azerbaijan Trade Institute (ITAZERCOM) commented: “Agriculture has become an extremely important sector in the country. It plays a key role in the process of diversification, and has the potential to become very important to European companies.”

As would be expected, the energy session – chaired by journalist Rick Gill, Managing Director, Natural Gas Europe – attracted a great deal of interest. Dr Urban Rusnak, Secretary-General, Energy Charter Secretariat, said: “In the 1990s, Azerbaijan was an importer of oil products, but within a decade was an exporter, and ten years later became one of the leading producers and exporters of oil and gas and will play an important role in the future of the EU.”

Vusal Mammadov, Director, State Oil Company of the Azerbaijani Republic (SOCAR), Belgian Office, spoke on the current status of the $45bn Southern Energy Corridor, which will bring gas from the Caspian – and eventually Central Asia and Iran – direct to an Italian interconnector.

Azerbaijan is currently striving to become the information and communications technologies (ICT) hub of the region. The sector has received $3bn of investment over the past three years. It is also central to the UN-mandated Trans-Eurasian Super Highway (TASIM) project, which will bring enhanced-bandwidth services between Frankfurt and Hong Kong, thereby reducing the digital divide between Western and Eastern Europe and Central Asia. Zaur Hasanov, Director, TASIM, said: “TASIM is a challenging and strategic project – passing through Azerbaijan – stretching for around 3000km and connecting the West to the East. It is a project of economic and geopolitical significance.”

Azerbaijan is currently leading the way regarding the unified provision of public services. The Azerbaijani Service and Assessment Network (ASAN) service, launched just under three years ago, provides access to 280 services from 10 government agencies using e-government services. These are supplied via a network of ASAN Centres, complemented by mobile ASAN services for those in the rural regions. Kamran Agasi, Director of the Innovations Centre, State Agency for Public Service and Social Innovations under the President of the Republic of Azerbaijan, explained: “We have served around 6m of the 9.5m people in Azerbaijan, and feedback indicates a 98 per cent satisfaction rate.”

The day concluded with a series of lively business-to-business meetings.