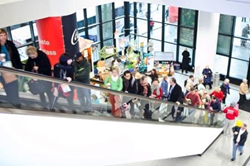 Our calling today, just as it was at inception, is to create a global trade franchise that will help advance Atlanta’s reach as an international business capital and extend Georgia’s influence in the world economy.” - Jeffrey L. Portman, Sr.,

AmericasMart Atlanta is a preferred destination for wholesale trade. It houses the world’s single-largest collection of home furnishings, rug, gift and apparel merchandise. More wholesale buyers and sellers from more places do business at AmericasMart than any U.S. marketplace. From its 1961 inception, AmericasMart has grown to encompass a product mix spanning more than 130 distinct categories of merchandise attracting buyers from across the retail and design landscape.

“AmericasMart and Atlanta have grown up together on the world stage,” notes Portman. “For almost 60 years we’ve looked with great pride upon the city we’ve helped to build. Our calling today, just as it was at inception, is to create a global trade franchise that will help advance Atlanta’s reach as an international business capital and extend Georgia’s influence in the world economy,” Portman adds.

ABOUT AMERICASMART
AmericasMart Atlanta is the nation’s only global wholesale marketplace housing the world’s single-largest collection of home, gift, area rug and apparel merchandise. The largest of AmericasMart’s 14 annual Markets and shows, The Atlanta International Gift & Home Furnishings Market and The Atlanta International Area Rug Market in January and July are the ignition switch for global retailing with buyers from every U.S. state and as many as 90 countries discovering product in more than 1,400 showrooms and more than 10,300 temporary exhibiting companies. ICON HONORS, the home and gift industry’s most celebrated recognition program, is produced and staged annually by AmericasMart.

Located in downtown Atlanta, the AmericasMart complex contains more than seven million square feet of space. It’s a huge global stage on which manufacturers, designers and sales representatives unveil new lines, launch new designs and introduce new categories – all for the benefit of buyers seeking all that is fresh and first in the home, rug, gift and apparel arenas. For more information, please visit http://www.AmericasMart.com. Follow us @AmericasMartATL or @AtlantaApparel.