In addition to a savory menu of international food and beverages, this year's Okuyamba Fest will feature two private screenings of Hospice Foundation's new documentary, "Road to Hope." Filmed in Sub-Saharian Africa, "Road to Hope" brings to light the plight of child caregivers after the loss of their parents. 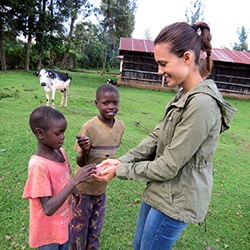 Actress Torrey DeVItto (star of NBC's upcoming new series "Chicago Med") was part of the "Road to Hope" film crew and is the film's narrator.

For children who have cared for their dying parents in Sub-Saharan Africa, hope is something to be held onto tightly. It's the hope that there will be someone to offer them the chance at a better life. The "Road to Hope" documents the lives of child caregivers and those they meet on their journey. Produced by the Hospice Foundation, this film shares its roots in Ugandan palliative care with its 2012 documentary, "Okuyamba."

Named for the first film, proceeds from Okuyamba Fest (a Lugandan word meaning "to help), will benefit the Road to Hope fund, which provides support to orphaned Ugandan child caregivers. In Uganda, as in many other countries throughout the world, children often are the primary caregivers to a parent or parents facing serious, life-limiting illnesses. After the death of their parents, with no breadwinner to support them, they often are forced to drop out of school and look for casual jobs such as selling ground nuts on the streets in urban areas or begging for money in order to survive. These children epitomize "okuyamba."

Established in 2012, and administered through the cooperative efforts of the Palliative Care Association of Uganda and the Hospice Foundation, the Road to Hope fund provides financial support for these orphaned child caregivers who could very easily find themselves on a much different road were it not for the assistance it provides.

This year’s Okuyamba Fest features a delicious sampling of foods, beers and wines from around the world, as well as a silent auction of craft and art items from Ugandan artisans. The event will be held at Center for Hospice Care's Mishawaka Campus, 501 Comfort Pl, Mishawaka, IN - next to Central Park. Reservations for the event are $25/person or $45/couple. Tickets are available online or can be purchased at the door. Seating for the private film screenings is limited. For more information, please contact Cyndy Searfoss at SearfossC(at)centerforhospice(dot)org or by calling 574.277.4203.