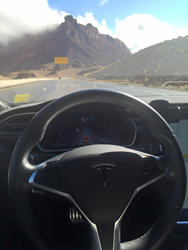 We knew we wanted to be the first group to make the cross-country attempt using the autonomous technology.

This is the first transcontinental attempt in a Tesla Model S P85D employing the Autopilot system released by Tesla just six days ago. The semiautonomous technology allows for hands and pedal-free driving on the highway, making lane changes and adjusting throttle, steering and breaking based on sensor scans. Tesla made the system available to Model S and X owners via wireless software update on Oct. 15.

“This car is the future—ask my attorney if you want to know why,” said Roy about the Tesla Model S and its Autopilot.

“Deena and I have been planning this autonomous record for over 11 months,” said Reese. “We knew we wanted to be the first group to make the cross-country attempt using the autonomous technology.”

Evidence of the team’s run has been submitted to the TransContinental Drivers Association for verification. All three drivers hold current or past transcontinental driving records; Mastracci now with three; Reese with four; and Roy with two. Mastracci and Reese were members of a team that broke the record of least non-driving time to cross the U.S. in an electric vehicle on April 19 of this year. Automotive journalist and author, Roy set a transcontinental driving record from Los Angeles to New York in a gas vehicle in 2006, which was since broken in 2013.

“This is now the fourth record-breaking transcontinental trip I’ve been a part of, and I have to say it has been the most exhilarating road trip of my life,” said Mastracci.

Official GPS tracking data of the trip will be provided by global fleet tracking company GPS Insight. Additional trip photos are available to members of the media upon request. Please direct all media inquiries to Josie Hankey at 410-420-2001 or by email at josie.hankey(at)fallstongroup(dot)com. For more information about this record-breaking trip and future expeditions, follow Reese’s Twitter account, @EVRecordAttempt.

About the Team
Alex Roy is an automotive journalist and author of “The Driver.” He set a transcontinental driving record from New York to Los Angeles in a gas vehicle in 2006 in 31 hours, 4 minutes. He is also the author of the blog “LiveDriveRepeat” at http://www.alexroy144.com and the President of http://www.europebycar.com.

Carl Reese is a general contractor and environmental specialist based in Valencia, California. He currently holds three transcontinental driving records—four with the addition of this autonomous vehicle record—including a Guinness Book World Record set in April 2015 for the least non-driving time to cross the U.S. in an electric vehicle.