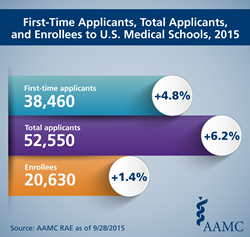 “The nation’s medical schools are creating innovative education and training programs to prepare tomorrow’s doctors to meet the challenges of the changing health care environment,” said Darrell G. Kirch, MD, president and CEO of the AAMC.

The number of students enrolling in the nation’s medical schools has increased 25 percent since 2002, reaching an all-time high of 20,630 this year, according to data released today by the AAMC (Association of American Medical Colleges).

In addition, the total number of applicants to medical school rose by 6.2 percent to 52,550, exactly double the percentage increase from the previous year. First-time applicants—an important indicator of interest in medicine—increased by 4.8 percent to 38,460.

“The nation’s medical schools are creating innovative education and training programs to prepare tomorrow’s doctors to meet the challenges of the changing health care environment,” said Darrell G. Kirch, MD, president and CEO of the AAMC. “This dynamic landscape is leading to a record number of students applying to and enrolling in medical school.”

Males enrolling in medical school accounted for approximately 52 percent of the student population in 2015, while females accounted for nearly 48 percent of enrolled students, the same as last year. Among first-time applicants this year, the number of women rose by 6.2 percent to 18,724, compared with a 3.5 percent increase in first-time male applicants (19,725). Among African-Americans, male enrollees increased 9.2 percent compared with the previous year, from 597 to 652.

“It is very encouraging to see consistent increases in the number and diversity of students in medical school,” said Kirch. “We are hopeful that this becomes a long-term trend as medical schools continue working in their communities to diversify the applicant pool through pipeline programs, outreach efforts, and holistic review initiatives.”

“This year’s numbers show that medical schools are doing their part to prepare the next generation of health care professionals. To ensure that we have enough physicians to care for our growing, aging population in the face of a real and significant doctor shortage in the coming decade, Congress also must increase federal support for residency training. Unless lawmakers act without delay, patients may not have access to the care they need in the future,” Kirch said.

Charts containing the 2015 data are available at https://www.aamc.org/newsroom/newsreleases/446400/applicant-and-enrollment-data.html

###
The Association of American Medical Colleges is a not-for-profit association representing all 144 accredited U.S. and 17 accredited Canadian medical schools; nearly 400 major teaching hospitals and health systems, including 51 Department of Veterans Affairs medical centers; and nearly 90 academic and scientific societies. Through these institutions and organizations, the AAMC represents 148,000 faculty members, 83,000 medical students, and 115,000 resident physicians. Additional information about the AAMC and U.S. medical schools and teaching hospitals is available at http://www.aamc.org/newsroom.