The Richmond Olympic Oval served as the signature venue for the 2010 Vancouver Winter Olympic Games and became the first such facility to live on as a community recreation center. CannonDesign is proud to have keyed design efforts for this special project - the only North American facility to receive the IAKS/IOC Award. 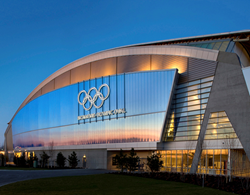 The Richmond Olympic Oval is recognized as an IAKS/IOC All Time Award Winner - one of the premier sports facilities of the past half-century.

We have always been proud of the visionary work that helped make the Richmond Olympic Oval an influential and notable facility - one of the best sports facilities of our time."

The Richmond Olympic Oval, the signature venue for the 2010 Vancouver Olympic Winter Games and now a multi-use community recreation center and sports venue designed by CannonDesign, is set to receive the All Time Award from the International Association of Sports and Leisure Facilities (IAKS) and the International Olympic Committee (IOC) – an award reserved for landmark sports facilities from the past half-century.

The All Time Award is being issued in conjunction with IAKS 50th anniversary and will not be awarded again until 2065. This year’s awards were presented during the IAKS annual Congress in Cologne, Germany Tuesday, October 27. The Oval is one of 10 facilities to receive the IAKS/IOC award and the only award-winner located in North America.

“We have always been proud of the visionary work that helped make the Richmond Olympic Oval an influential and notable facility, a cultural treasure for the community in the years since, and now with this award from IAKS, one of the best sports facilities of our time,” said CannonDesign Principal Ken Wiseman, who led the firm’s efforts on the Oval. “We are honored to have worked with the City of Richmond and so many other people who helped make this building a reality.”

The Richmond Olympic Oval is a breakthrough facility in the world of sports and community recreation design. Prior to the Oval’s creation, Olympic speed skating venues were built as single-use “sport-only” buildings that had little value to the community after the games, resulting in “white elephants” with long-term revenue and operational challenges and little or no community use.

Equipped with one of the most flexible and adaptive interior sport environments ever, the Oval has changed how designers view and create Olympic facilities. The level of convertibility and multi-use achieved in the Oval is unprecedented and unparalleled and continues to enrich and nourish the Richmond, British Columbia community and its surrounding region.

“We were fortunate to work with a city that challenged us to raise the bar when it came to sports design, sustainability and community engagement,” added Wiseman. “This award is further evidence of that vision as the Richmond Olympic Oval continues to leave a remarkable legacy.”

The IAKS/IOC award adds to the recognition the Oval has received since its opening, including the Royal Architectural Institute of Canada Award of Excellence for Innovation in Architecture, Athletic Business’ Facility of Merit honors and ArchDaily’s Building of the Year recognition, along with numerous local and regional design awards from across North America.

Along with the ROO, CannonDesign has played a key design role in numerous other significant North American sports venues including PNC Park in Pittsburgh, TD Place at Lansdowne Park and several key venues for the 2015 Pan Am Games and Women’s World Cup. Additionally, CannonDesign has created award-winning training centers for the US Olympic Committee and collegiate recreation and athletics facilities.

The Richmond Olympic Oval is the first Olympic Oval to live on as a valuable community recreation center and civic asset.