The U.S. Department of Agriculture should stop distributing carcinogenic hot dogs and other processed meats to children through the National School Lunch Program, says a petition filed on Oct. 27 by the Physicians Committee—a nonprofit of 12,000 doctors. 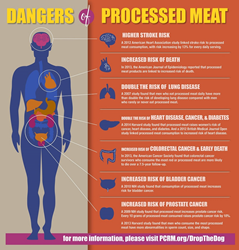 The Dangers of Process Meat Consumption

The U.S. Department of Agriculture should stop distributing carcinogenic hot dogs and other processed meats to children through the National School Lunch Program, says a petition filed on Oct. 27 by the Physicians Committee—a nonprofit of 12,000 doctors.

The petition, filed with USDA Sec. Tom Vilsack, is based in part on an Oct. 26 World Health Organization scientific report that finds processed meats such as hot dogs, pepperoni, bacon, sausage, and deli meats are “carcinogenic to humans.” WHO has now classified processed meats in the same category as asbestos, tobacco products, and other carcinogens.

The WHO report, published in Lancet Oncology, is based on research from more than 800 studies looking at the cancer-causing properties of processed meats. The authors highlighted a meta-analysis that found each 50 gram portion of processed meat—approximately the size of a typical hot dog—eaten daily increases the risk of colorectal cancer by 18 percent.

The researchers also observed associations between red and processed meat products and stomach, pancreatic, and prostate cancers. Processing and other cooking methods for meat, including curing, pan-frying, and smoking, produce various carcinogenic chemicals.

The Physicians Committee’s USDA petition is also based on findings from the American Institute for Cancer Research, the World Cancer Research Fund, and the National Institutes of Health.

In 2009, the Physicians Committee, through its subsidiary the Cancer Project, petitioned USDA to prohibit the distribution of processed meat through the National School Lunch Program due to the increased risk of cancer that results from consuming processed meat. USDA denied the petition due to a purported lack of “consensus documents of the U.S. Government or of the leading world bodies with cancer expertise” but said that it would reconsider the request “[s]hould expert consensus develop.”

Despite the scientific consensus about the cancer, diabetes, and heart disease risks associated with processed meats, they are still widely consumed in the United States, especially by children. A survey conducted this year by the Physicians Committee found that the magazine of the School Nutrition Association, which represents school food service workers, continues to promote pepperoni pizza, corn dogs, and other processed meats.

According to the American Cancer Society, colorectal cancer is the third most common cancer among men and women.