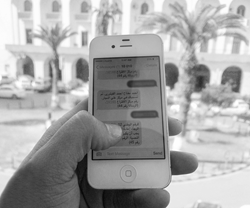 Building upon the technological success of an SMS or text message voter registration system, the Libyan High National Elections Commission (HNEC) is releasing the code base for free. The system, now called SmartElect, enabled more than 1.5 million Libyans to register to vote using text messages during two elections in 2014. Together with software development firm Caktus Group, they are open-sourcing SmartElect, allowing other governments to freely use and adapt the software.

“This technology has contributed to the improvement of the performance of our organization [HNEC] significantly. It helped us to overcome many difficulties that hindered the application of electoral laws. Further, it has saved us considerable time, effort, and money,” said Dr. Emad Alsaiah, Chairman of the Libya High National Elections Commission.

SmartElect is the first system of its scale used in an election. Furthermore, this is the first time an SMS elections management system has been offered as open source; other systems are proprietary.

“For new democracies, a new approach was needed to ensure access and inclusivity,” said Tobias McNulty, CEO and co-founder of Caktus Group. “Libya is a good example of how we can incorporate a familiar technology like SMS in an innovative way. We do not need to break down barriers to participation; we can leapfrog them.”

About Caktus Consulting Group
Caktus Group (http://www.caktusgroup.com) is a leading U.S. web and SMS application development company that specializes in Django, an open source web framework. Caktus has built over 100 secure and reliable applications that have reached more than 70 million people worldwide.