The New York Film Academy Documentary Department is proud to officially announce five of its recent graduates will premiere their new films at DOC NYC. 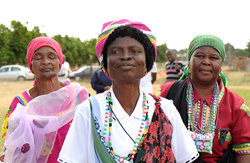 "Every NYFA film programmed absolutely deserves to premiere at such an important festival," says NYFA’s Documentary Chair Andrea Swift. "At once entertaining and important, each of the five tells a surprising story in a voice all to its own."

The New York Film Academy Documentary Department is proud to officially announce that five of its students will be screening their documentary shorts at DOC NYC this upcoming November 13th at 10:30am.

"Every NYFA film programmed absolutely deserves to premiere at such an important festival," says NYFA’s Documentary Chair Andrea Swift. "At once entertaining and important, each of the five tells a surprising story in a voice all to its own."

ALIVE & KICKING
by Lara-Ann de Wet
In Limpopo, South Africa, the village grannies lace up their soccer boots and start kicking their way down the field — even through centuries of oppressive taboos. They play a game of soccer and eventually begin to break into the laughter and traditional song that help fuel their singular struggle for decent lives and a league of their own.

ALL IN MY HEAD: THE PATRICK STEIN STORY
by Colleen Shaw
An 18-year-old star athlete wakes to discover he can't move. Struck by an aneurism during homecoming, he's now trapped inside the nightmare known as “Locked In Syndrome.” Three years later, he’s still there being fed through a tube. Medical wisdom says he will be "locked in" for life, but medical wisdom hasn’t met Patrick Stein.

Patrick can still blink his eyes, and that’s enough to wage a surprisingly cinematic fight for a “real life” — starting with the demand for his right to risk death for just one taste of real food.

LEGACY
by Amy J. Wright
The tradition of cowboying is alive and well—in Brooklyn. And as Black as it ever was. Take a glimpse into the lives of the men and women who comprise The Federation of Black Cowboys. From trail riding in Virginia, to giving riding lessons to kids back in Brooklyn, The Federation ensures that the legacy of America's forgotten black cowboys will live on for generations to come.

A woman takes a picture of herself in the mirrorTHE HAPPIEST FAMILY by Camille Bildsøe
When Camille was twelve years old, the world, as she knew it, fell apart. Most of the next 3 years are missing from her memory. Today, 9 years later, she pieces them together from her brother's memories and from the tabloids that daily heralded her family's very public collapse.

Discovered floating off the coast of Belize, Freya was so badly injured she couldn’t even dive down to escape the birds pecking at the stump of what had been her front flipper. The endangered sea turtle had survived a serious shark attack and is struggling for her life. The odds are not in her favor, but with a handful of volunteer rescuers working around the clock to save her, Freya at least has a fighting chance.

Seats are limited. Reserve yours now at: http://www.docnyc.net/film/doc-nyc-u-new-york-film-academy/