Transgender in the Workplace on The American Law Journal: Video Online Now and Airs 7:00 p.m. Monday, November 2, 2015 on the Philadelphia CNN-News Affiliate WFMZ-TV

Has the Supreme Court’s decision to make same-sex marriage legal and the EEOC’s new interpretation of Title VII expanded LGBT rights in the workplace? A panel of experts review recent news and legal developments. 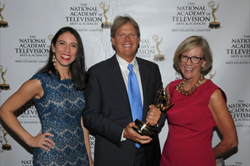 “There are some older federal court decisions that went out of their way to tell lesbian, gay and bisexual employees that they did not have a claim. This new EEOC ruling on sexual orientation says they do.” - Thomas Ude, Mazzoni Center

LGBT rights are in the spotlight as an extension of the Supreme Court and individual states’ consideration of same-sex marriage, and the U.S. Equal Employment Opportunity Commission (EEOC) is beginning to include sexual orientation in Title VII discrimination protections. There may be a further expansion of rights as it relates to the “T” in LGBT, transgender individuals in the workplace.

In the 1970's Christine Jorgensen became the first widely known American transgender person. Chaz Bono, Renee Richards, and now Caitlyn Jenner have made headlines in the news in the last few years, posing the question of whether transgender individuals are becoming more understood and accepted. A panel of experts discusses the types of issues transgender workers might face on the job.

Recently honored with an Emmy® award in the Mid-Atlantic region’s category Interview/ Discussion Program/Special, The American Law Journal is the weekly talk-feature program airing Mondays at 7:00 p.m. on the CNN-News affiliate for Philadelphia, WFMZ-TV 69 to Pennsylvania, New Jersey and Delaware.

All programs are available at http://www.LawJournalTV.com