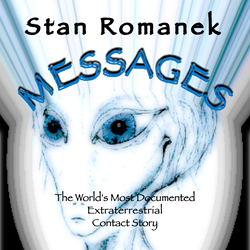 Brook Forest Voices announces the audiobook release of "Messages," the startling, bewildering, intriguing and wildly popular accounts of Stan Romanek’s scientifically supported and well documented experiences of alien encounters and abductions. The audiobook will be available in streamable, downloadable and CD formats directly from Brook Forest Voices Audiobook Store and through your favorite online retailer or library.

The audio book is augmented by lab reports, testimonial from prominent professors, descriptions from witnesses as well as vivid recollections of photo and video still shots, and examples of proven mathematical equations, which Stan should have had no known knowledge. Additionally, Stan recalls the infamous "alien in the window" video footage featured on "Larry King Live."

As difficult as Stan finds it, he even shares information regarding his regression sessions that shed more light on his experiences. Stan's regressions are more than simply remembering events that transpired during his encounters, they have also become a bridge for information about the origin’s of these strange beings.

While the encounters are at times frightening, Stan and his wife Lisa take a somewhat lighthearted approach by affectionately naming each creature and not backing down from the frightening experiences by taking every opportunity possible to document whatever they can to help explain these rare and odd occurrences.

Romanek, who still resides in Colorado, has been interviewed on "Larry King Live," "20/20," "Coast to Coast" and other national television and radio programs. He has been invited to speak at UFO conferences across the country. His unique story has appeared in "UFO Magazine," "MUFON Journal" and other periodicals.

About Brook Forest Voices: a complete audio production studio located just west of Denver in Evergreen, CO, specializing in audiobook narration, production and publishing. BFV is designed to help publishers (as well as authors) and businesses with all their audio needs. Publishers, businesses, and authors wanting to learn more about our services can visit http://www.brookforestvoices.com or contact Jaime Andrade, BFV Business Manager at 303-670-4145.