Author Combines Bible, Historical Fact, and Fiction to Craft a Scenario of How the World’s First Terrorist Became One of the World’s Greatest Christians 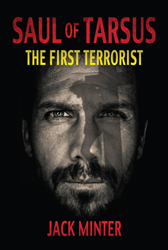 The man who was once the greatest intentional murderer of Christians, “the first terrorist,” was so completely changed by God that he became one of the greatest Christians of all time, eventually becoming a martyr for his faith in Jesus Christ. That man, the Apostle Paul, is the subject of author Jack Minter’s new book, Saul of Tarsus: The First Terrorist (Brown Books Publishing Group, Nov. 2015).

“I believe readers will find this a book of intrigue,” said Minter. “I’ve blended biblical text and historical data, as well as fictional scenarios, to provide readers with a map of how Saul became the Apostle Paul, one who spread the gospel of Jesus Christ at the risk of his own life following Jesus’s crucifixion.”

Saul of Tarsus: The First Terrorist also shows the similarities and differences between Jesus and Saul that could have led to Saul’s murderous vengeance of early Christians. “When writing about Paul, I wondered how he could be that forgiven of such atrocities by God, much less be that changed as a person to abandon his hatred and become a follower of Jesus Christ,” said Minter.

Saul of Tarsus: The First Terrorist is a study in contrasts and a thought-provoking novel that will have readers diving into the Bible with a new perspective. Today’s world is still filled with terrorists who persecute Christians for their faith or due to intolerance of their beliefs. Saul took the lead as the first terrorist, but he was also so completely changed by Jesus that, as Paul, he became one of the most powerful Christians of all time.

Minter also takes a look at a fictional account of how Jesus and Paul could have potentially known one another long before they met as adults on the Road to Damascus. According to Minter, this possibility opens a new way of understanding how Paul grew to become one who despised and murdered Christians out of pure hatred and vengeance. “If you examine Paul’s upbringing in the Jewish faith, as well as Jesus’s, you see that it’s quite possible that their paths crossed well before that eventful day on the Road to Damascus when Paul encountered Jesus and turned from the greatest hater of Christians into a Christian himself.”

For more information and to purchase Saul of Tarsus: The First Terrorist, please visit
http://www.JackMinter.com.