Lucchese hosted a "Kacey for Lucchese" launch party in their Nashville store with Kacey Musgraves to celebrate their boot collection, which officially hit stores and online November 1. 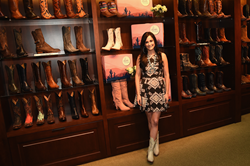 Growing up in Texas, I’ve always loved wearing boots and having the opportunity to work with such an amazing brand and being so intricately involved in the design process has been so much fun.

Lucchese is pleased to announce that Grammy-winning singer/songwriter Kacey Musgraves celebrated the launch of her "Kacey for Lucchese” boot collection last night with celebrity and music industry friends at Lucchese’s retail store in the Gulch in Nashville.

A dynamic new collection of boots inspired by Kacey’s life and experiences both musically and personally over the past few years, "Kacey for Lucchese” is a collaboration between the Texas native and Lucchese, the legendary Western brand renowned for its handmade bootmaking process.

“This is a dream come true,” said Kacey while addressing partygoers. “Growing up in Texas, I’ve always loved wearing boots and having the opportunity to work with such an amazing brand and being so intricately involved in the design process has been so much fun. I’m really proud of this collection.”

The “Kacey for Lucchese” collection officially launched November 1. In addition to CountryOutfitter.com and select Cavender’s locations, the collection can be found at Lucchese retail stores in Nashville, Houston, San Antonio and Santa Fe, and on Lucchese.com.

About Kacey Musgraves:
Texas-native and Nashville-based singer/songwriter, Kacey Musgraves released her Mercury Records Nashville debut album, Same Trailer Different Park, in the spring of 2013 to massive critical acclaim and recognition. The album, which she co-produced with Shane McAnally and Luke Laird, debuted at No. 1 on Billboard's Top Country Albums chart making her the first solo female in five years to open at No. 1 with a rookie release, and just seventh in the 22-year Nielson SoundScan era. The gold-certified album includes her top 10, platinum-selling single "Merry Go 'Round" and gold-certified hit “Follow Your Arrow.” Musgraves has taken home the award for "New Artist of the Year" at 2013's CMA Awards and also won two Grammy Awards for Best Country Song (“Merry Go ‘Round”) and Best Country Album (Same Trailer Different Park), the ACM Award for Album of the Year (Same Trailer Different Park), and most recently the 2014 CMA Award for Song of the Year (“Follow Your Arrow”).

Musgraves released her highly anticipated sophomore album, Pageant Material, on June 23rd where it debuted at No. 1 on the Billboard country albums chart and No.3 on the Billboard 200. Kacey co-wrote all tracks on the album and also co-produced teaming up again with Shane McAnally and Luke Laird. Pageant Material includes debut single “Biscuits” and “Dime Store Cowgirl.” The album has been met with massive critical acclaim and recognition from press outlets all over the world.

About Lucchese:
Texas-based Lucchese is a legendary bootmaker and iconic brand of the American West. Applying the same craftsmanship principles and techniques since 1883, Lucchese artisans use only the finest leathers, preeminent materials and a proprietary twisted cone last to construct boots of unrivaled quality, fit, comfort and style.