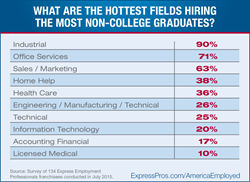 In reality, we’re finding out that many sectors are hiring non-college grads, from industrial to manufacturing, healthcare to IT,

In a recent poll of Express franchisees, respondents were asked, “What are the hottest fields hiring the most non-college graduates?”

“Today’s conventional wisdom suggests that the path to a rewarding career must run through a four-year university. In reality, we’re finding out that many sectors are hiring non-college grads, from industrial to manufacturing, healthcare to IT,” said Bob Funk, CEO of Express, and a former chairman of the Federal Reserve Bank of Kansas City.

“For those who haven’t graduated from college, these are the areas with the best job prospects. Keep that in mind not only when searching for a job but also when looking for training and certification opportunities available to non-college grads.”

About Robert A. Funk
Robert A. “Bob” Funk is chairman and chief executive officer of Express Employment Professionals. Headquartered in Oklahoma City, the international staffing company has franchises in the U.S., Canada and South Africa. Under his leadership, Express has put more than five million people to work worldwide. Funk served as the Chairman of the Federal Reserve Bank of Kansas City and was also the Chairman of the Conference of Chairmen of the Federal Reserve.