San Diego entrepreneur John Cox filed the California Is Not For Sale ballot initiative on the 27th of October 2015, a reform that will require members of the California State Assembly and Senate to wear the logos of their top 10 campaign contributors while acting in any official capacity. 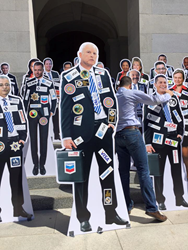 The campaign is being launched in three cities this week: San Diego, Los Angeles, and San Jose. The California Is Not For Sale initiative will be staging protests using cutouts of all 120 current Assembly members and Senators who will be covered in the logos of their campaign supporters. Last September, the campaign was run in Sacramento on the steps of the California State Capitol (see attached photos).

The initiative comes on the heels of major corruption cases, like California State Senator Ron Calderon who was arrested earlier this year. Time Magazine reported in late 2014 that money spent on political campaigns nationally has increased by 500% since 1985.

“That money comes from wealthy companies and special interests that curry favor with elected officials. It is totally legal according to the laws on the books, but they are able to wield incredible power in our State,” said Cox.

The new rules have a purpose. According to the California Is Not For Sale organization, when elected officials stand on the floor of the Assembly or Senate to advocate for policy that will affect everyone in the State, potential conflicts of interest stemming from their campaign finance will be visible on their person.

“If an Assemblyman argues for oil companies to have the right to drill in our state forests because he is generously funded by wealthy oil corporations, the average citizen would not know,” said Cox. “Under these new rules, that conflict of interest would be sewn onto his chest for everyone to see.”

Title and Summary is expected to be approved by December and the organization will launch an active signature gathering campaign on January 1, 2016.

About California is Not For Sale Initiative:

Our bill will require California legislators to display the logos of their top ten donors when they speak on the Assembly Floor. This level of transparency will expose conflicts of interest that exist between politicians and big money.

For more information about California is Not For Sale initiative please visit: http://www.californiaisnotforsale.com/ or contact us directly