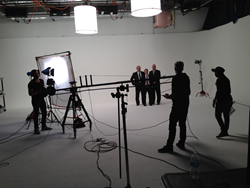 Filming the partners for the "Champions In Your Court" Commercial

We wanted a quality commercial that was totally different from all of the attorney spots in our market. This commercial exceeded our expectations.

The personal injury law office of Craig, Kelley & Faultless LLC’s ad campaign, “Champions in Your Court,” has been named a Silver Winner in the 36th Annual Telly Awards, a national contest that receives nearly 12,000 entries a year. The commercial, produced by BJ Golnick Pictures, inc., took home Silver awards for three different sub-categories: National Legal/Law Campaign, Directing, and Cinematography. Less than 10% of entries are chosen as winners of a Silver Telly.

To view the commercial, visit https://youtu.be/Mo94OyH9KLs.

David Craig, a partner with Craig, Kelley & Faultless, stated, “It was an absolute pleasure working with the commercial’s producer/director, BJ Golnick, and his father, the creative/executive producer, H. Marshall Golnick. We wanted a quality commercial that was totally different from all of the other attorney spots in our market. This commercial exceeded our expectations. We are very proud to be part of this ad campaign and very excited about this prestigious award.”

A judging panel of more than 500 industry professionals, each a past winner of a Silver Telly and a member of The Silver Telly Council, judged the competition. The Silver Council evaluated and judged entries against a high standard of merit. Judges represented large and small advertising agencies, television stations, production houses and corporate video departments from all over the U.S.

About The Telly Awards

Craig, Kelley & Faultless is an Indiana firm that practices statewide and handles national truck injury cases. David W. Craig has championed the rights of truck wreck victims for over 30 years. The attorneys are experienced in cases involving 18-wheelers, serious car wrecks, and wrongful deaths. They have been honored with awards for outstanding service based upon peer and client reviews, and have received awards for their results. For more information about Craig, Kelley & Faultless, visit http://www.ckflaw.com.