Elton John and his band return to Mobile, Alabama for one performance at the Mobile Civic Center (http://www.mobilecivicctr.com) on Tuesday, March 15, 2016 at 8 pm that will feature iconic hits and classic album tracks from throughout his incredible five-decade career, as well as a selection of songs from his highly-acclaimed album, the recently re-released 40th Anniversary CD, Goodbye Yellow Brick Road. 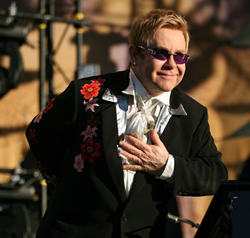 Elton John and his band return to Mobile, Alabama for one performance at the Mobile Civic Center on Tuesday, March 15, 2016 at 8 pm as part of a nine-city concert tour that will feature iconic hits and classic album tracks from throughout his incredible five-decade career, as well as a selection of songs from his highly-acclaimed album, the recently re-released 40th Anniversary CD, Goodbye Yellow Brick Road.

The public on-sale will begin Friday, November 13 at 10 a.m. Visit Ticketmaster.com for more information. “The simple truth is I want to spend more time with my family and less time touring,” said Elton. “I am all too aware of how precious the time ahead is. My sons are growing up so quickly. Their early years are just flying by and I want to be there with them. I remember Mobile fondly from my first ever visit in 1973, and this concert will give me a chance to say thank you to my fans here who have been so faithful over the decades. It’s always important for me to bring my music to everyone.”

Elton John’s band features Nigel Olsson (part of Elton’s original three-piece band) on drums, Davey Johnstone (who first recorded with Elton in 1971 and joined the band a year later) on guitar, John Mahon on percussion, Kim Bullard on keyboards and Matt Bissonette on bass. One of the most successful artists on the road today, Elton and his band perform a concert you will never forget: the entire audience singing along to much-loved classic songs such as “Your Song”, “Rocket Man”, “Bennie and the Jets”, “Philadelphia Freedom”, “Crocodile Rock”, “Don’t Let the Sun Go Down on Me”, and many more.

"We are thrilled to welcome the incomparable Elton John and His Band back to the stage of the Mobile Civic Center for the first time in sixteen years!" said Bob Brazier, General Manager of SMG managed Mobile Civic Center. "With Elton John's vast repertoire of musical masterpieces, this will be a magical night of hit after hit that will no doubt have the audience on their feet from the first note to the last! We are honored to host this unforgettable evening that no one should miss.”

The monumental career of international singer/songwriter and performer Elton John spans five decades. He is one of the top-selling solo artists of all time with 35 gold records and 25 platinum albums, 29 consecutive Top 40 hits, and he has sold more than 250 million records worldwide. John holds the record for the biggest selling single of all time, “Candle in the Wind ’97,” which sold over 37 million copies. Since his career began in 1969 he has played
over 4,000 concerts worldwide.

TICKETS ON SALE FRIDAY, NOVEMBER 13 AT 10 AM
Tickets will be available online at Ticketmaster.com, at Ticketmaster outlets or charge-by-phone at (800) 745-3000. A service charge is added to each ticket. There is an 8 ticket limit per customer.