"GET IT" is the #2 Indie song in the country as reported by Media Base! 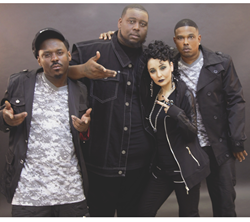 We've maintained our independence power. We resonate a positive energy. Cannabis Club, our name represents the organic nature of the group...

There are more than leaves shaking and dropping from the Money Tree Entertainment camp, as the label prepares to debut a new music video from Cannabis Club ATL to coincide with their single "Get It"- impacting Urban formats now.

On Friday, November 6, 2015, the stylish and extraordinary Hip Hop group Cannabis Club ATL, releases a music video for their song "Get It" on their label's official Vevo and YouTube channels. The video was filmed in various trendy locations and sound stages around Atlanta, GA. Money Tree Entertainment's in-house film production was directed by PhilmWurks, features each member of the group: The Legendary Fruitman, Trapacana, N.I.L.E along with introducing a new member, the mysterious exotic Manal; "a Palestinian by way of Sydney, Australia." "Get It" the video is surrounded by a sophisticated monster music track with a rhythmic bass line groove that draws you, into the Atlanta nightlife. Layered edit-cuts give the video a strong edgy feel that complements the song's upbeat, dance structure. "We've maintained our independence power. We resonate a positive energy. Cannabis Club, our name represents the organic nature of the group," says the group's architect The Legendary Fruitman.

Additionally, added to the video distribution, will be a 3 minute EPK to accompany the "Get It" video that will profile interviews with members, of Cannabis Club ATL. Following its premiere, the music video is scheduled to hit video shows and music journalists nationwide. California Music Channel’s: The Beat Lounge show, will start airing the video in rotation beginning Monday, November 9, 2015, along with the Positive Progression TV Show that services the Carolinas, New York Tri-State area, Canada, and the Caribbean. "Get It" the single is Cannabis Club's sophomoric studio production on Money Tree Entertainment distributed by Empire Distribution.

About Cannabis Club “Get It”:
Cannabis Club's "Get It" has a robust showing on Media Base "Indie Report" as the #2 song in the country and in music trade AllAccess.com Urban/UAC "Cool New Music" chart and on the "Taking Off Report". For updates on Cannabis Club ATL, the new single "Get It" and music video go to http://www.moneytreerecords.com, Like Us on Facebook or Follow Us on Twitter. Buy It, Blast It - "Get It" available on iTunes and Amazon.