PreemploymentDirectory.com’s background screening focused e-newsletters voted as world class by MarCom, a leading marketing and communications association. The Global Background Screener was selected as a Gold winner and The Background Buzz received honorable mention out of 6,500 entries. 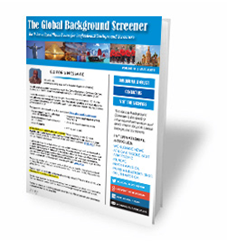 “Our team is ecstatic to be recognized for creating two of the top e-newsletters in the world."

Today PreemploymentDirectory.com celebrated the announcement by MarCom that their two flagship newsletters for the background screening industry were selected as top performers in the 2015 awards competition. MarCom’s International Awards Competition has become one of the largest competitions for marketing and communications professionals in the world.

W. Barry Nixon, COO, PreemploymentDirectory.com said, “Our team is ecstatic to be recognized for creating two of the top e-newsletters in the world. It’s an unbelievable achievement that has not really sunk in yet.” Barry added that he would be remiss not to give special credit to Gracy Wilkins who was the creative force behind creating both The Global Background Screener and The Background Buzz. He said, “All our fights over color choices, images and look really paid off.”

MarCom Awards announced winners for the 2015 international awards competition that recognizes outstanding creative achievement by marketing and communication professionals. There were over 6,500 entries from throughout the United States, Canada and 15 other countries in the 2015 competition. The MarCom competition MarCom entries come from corporate marketing and communication departments, advertising agencies, PR firms, design shops, production companies and freelancers. The competition has grown to perhaps the largest of its kind in the world. A look at the winners shows a range in size from individual communicators to media conglomerates and Fortune 500 companies. The competition is so well respected in the industry that national public relations organizations, local ad clubs, and local business communicator chapters are entrants.

Judges are industry professionals who look for companies and individuals whose talent exceeds a high standard of excellence and whose work serves as a benchmark for the industry. Winners were selected from over 200 categories in seven forms of media and communication efforts- marketing, publications, marketing/promotion, public service/pro bono, creativity and electronic/interactive. A complete list of Platinum and Gold Winners can be found on the MarCom Awards website at http://www.marcomawards.com.

In addition, to his responsibilities at PreemploymentDirectory.com Mr. Nixon serves as an International Ambassador for the National Association for Professional Background Screeners (NAPBS) on their Global Advisory Council.

Stay informed about the latest developments and news about Background Screening