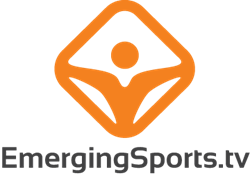 "Bringing Your the Next Wave of Sports Broadcasting!"

For years, some of the most dramatic moments in sport have been relegated to competitors’ memories and, more recently YouTube videos. -- Dr. John G. Duesler, Jr. Principal, EmergingSports.tv

“We had the privilege to produce television programming from some of the sports’ most iconic events, as well as its best kept secrets,” explained Dr. John G. Duesler, Jr., Principal at Emerging Sports TV. “Our primary object during this, our first year of broadcasting, was to celebrate the amazing athlete, events, and sports that, together, make up this new category of sports broadcasting.”

Throughout Emerging Sports TV’s eight, one-hour episodes in 2015, sports as arcane as snow shoe racing, disc golf, and slacklining were bundled together with the well known Pikes Peak International Hill Climb and USA Curling Nationals to create programming from a wide array of sports. You can find a sampling by CLICKING HERE TO WATCH EPISODE 107.

“For years, some of the most dramatic moments in sport have been relegated to competitors’ memories and, more recently YouTube videos,” Duesler said. “But many of these national and world championship events have gained enough of a following and developed into well-run competitions, that they are now worthy of television broadcasting. All of the sports have dreamed of someday being on television, and we, at Emerging Sports TV, believe the time has come for that to happen.”

With a rich list of accomplishments to choose from, the Emerging Sports TV principal has announced the award finalists in the following categories…

The Emerging Sports TV Award winner will be revealed during the season-ending episode, which is currently being aired on 23 regional cable sports affiliates around the nation and internationally. Combined, these affiliates reach 88.5 million subscriber households. Awardees will also be posted on the Emerging Sports TV web site on Monday, November 16, 2015.

Emerging Sports TV is a global media outlet for national and world championship sporting events that have developed enough to be broadcast-worthy. The sports are drawn primarily from four categories: outdoor sports; water sports; winter sports; and motor sports. Emerging Sports TV is distributed to 23+ regional sports cable television affiliates, which comprise 88.5 million household subscribers. The show is also distributed on its digital platform on http://emergingsports.tv, as well as a number of social media outlets. For more information about including your sport in our series, becoming an advertiser, or elevating your brand as one of our broadcast partners, contact Dr. John G. Duelser, Jr., Principal at 215-913-0569 or jgd(at)emergingsports(dot)tv.