The European Azerbaijan Society (TEAS) has organised a concert by the co-directors of the Gabala International Music Festival in Azerbaijan – Farhad Badalbeyli and Dmitry Yablonsky – joining forces with violinist Janna Gandelman. The event paid tribute to Fiona Maclachlan, a great supporter of Azerbaijan, and was held in support of Cancer Research UK. 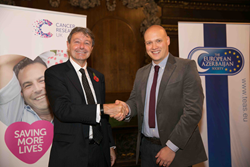 She was a remarkable woman and is in my heart every day.

Held amidst the impressive historic surroundings of St. James’s Church, Piccadilly – designed by Sir Christopher Wren, also the architect for St. Paul’s Cathedral – a concert on 10 November was held to celebrate the life of Fiona Maclachlan, a great friend of Azerbaijan. The evening featured leading conductor and cellist Dmitry Yablonsky, alongside composer, educator and pianist Farhad Badalbeyli, Rector of Baku Music Academy – co-directors of the annual Gabala International Music Festival in Azerbaijan. Violinist Janna Gandelman, who has brought Arab and Israeli music students together via her Polyphony Foundation initiative, joined them. The event, attended by 300 family members, friends of Fiona and of Azerbaijan, was organised by The European Azerbaijan Society (TEAS) and a retiring collection was made in aid of Cancer Research UK.

Alastair Maclachlan, husband of Fiona, whose work brought her to Azerbaijan in 2004, recalled: “This is the kind of evening that Fiona would have enjoyed. She loved to be with family, old friends and new friends, but most of all she loved to extol the wonders of Azerbaijan – particularly the music, heritage and culture that has come out from this marvelous country. This concert was suggested by Dmitry and Farhad, and I am grateful to them and TEAS for organising it.”

Lionel Zetter, Director, TEAS, stated: “Tonight’s event is dedicated to memories of Fiona, our much-missed former colleague. She was a great advocate of Azerbaijan. She loved the people, the countryside, the ecology, and the country generally. Fiona’s enthusiasm for the country extended to its music, and we are honoured that tonight’s concert will feature performances by Dmitry and Farhad, both of whom were close personal friends of Fiona.”

Dmitry Yablonsky commented: “Fiona was, and is, my friend. She probably knew more about Azerbaijan than anyone else, due to her extensive research and travels in the country. She was a remarkable woman and is in my heart every day.”

The programme of reflective music began with Czech composer Jan Benda’s 'Grave', taken from his Violin Concerto in G Major, in a cello transcription, the deep sonorities of which summed up the emotional nature of the evening. This was followed by Robert Schumann’s Drei Fantasiestücke, which are imbued with a melodious and song-like quality.

Thereafter came a rare performance, featuring Janna Gandelman, of Gara Garayev’s 'Sonata for Violin and Piano', written in 1960, and dedicated by this leading composer to the memory of the pianist Vladimir Kozlov, a long-term friend. Garayev was a student of Dmitry Shostakovich and applied his modernistic atonal and chromatic style to the eastern harmonies and microtones of mugham, the national music of Azerbaijan.

In a surprise addition to the programme, Farhad Badalbeyli performed his best-known composition, 'The Sea (Deniz)', a rhapsodic and melodious piece for solo piano, inspired by his wife.

The contemplative theme recommenced with Rachmaninov’s romantic 'Three Romances for Cello and Piano', written in 1890 and dedicated to his cousin Vera, and Janna Gandelman again came to the stage for Debussy’s impressionistic 'Clair de Lune', which describes the motion of dancers in the moonlight. The evening continued with the cello transcription of Rachmaninov’s emotionally-charged 'Vocalise' – literally a song without words.

Following a standing ovation, Janna returned to play Massanet’s evocative 'Meditation' from the opera Thais, and the evening concluded with the 'Largo' from Chopin’s 'Sonata for Cello and Piano', played by Farhad and Dmitry.

This was a glorious musical celebration of Fiona, a wonderful mother, grandmother and friend of Azerbaijan, who is much missed.