Massachusetts-based singer-songwriter, Seth Glier debuts his acclaimed new album "If I Could Change One Thing" in the United Kingdom opening for Ronnie Spector. 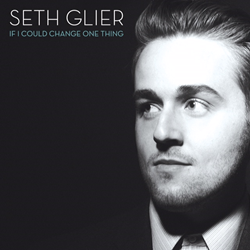 Singer-Songwriter and multi-instrumentalist Seth Glier has just been invited to join the incomparable pop icon, Ronnie Spector on her “Ronnie Spector Sings The Fabulous Ronettes” tour in the UK at the end of the month. Glier travels across the pond from his native Massachusetts to England to debut his acclaimed new album “If I Could Change One Thing”, during the weeklong tour starting on November 28 in Liverpool, full tour dates below.

“If I Could Change One Thing” debuted in the Top 40 of the Singer-Songwriter chart on iTunes and remains on the “Hot Tracks” list 34 weeks later. Billboard.com premiered the music video for the title track “If I Could Change One Thing” featuring American Idol’s Crystal Bowersox. Glier’s genuine modern-pop sound merges genres seamlessly and his heartfelt, universal lyrics about falling in and out of love and social action, capture a songwriter and performer at the peak of his young abilities. Available now via iTunes and MPress Records.

On tour, Glier performs with Joe Nerney, a blind 62-year-old sax player whom he met when he was 15. Nerney’s contributions add another layer to Glier’s captivating live show. “Each performance when I look to my left and see Joe slaying the audience with a solo and I watch him smile after the audience applauds, it remains the most authentic thing I’ve ever seen in my life,” admits Glier. Nerney, will also be performing with Spector’s band along the tour.

At only 26 years old, Glier has released three albums prior to “If I Could Change One Thing”, including his Grammy® nominated sophomore album “The Next Right Thing”, and the critically praised “Things I Should Let You Know” via MPress Records. Glier has shared the stage with artists as diverse as James Taylor, Ani DiFranco, Edwin McCain, Martin Sexton, Emmylou Harris and Ryan Adams, and has quickly become known for his passionate live sets and powerful command of both piano and guitar.

Critical acclaim for “If I Could Change One Thing”:

“For Glier’s fourth album, he’s taking his aesthetic from acoustic balladeer to modern-pop crooner, all while preserving the heartfelt songwriting.” – BILLBOARD

“Folk lyrics with a pop feel, philosophical musings with a backbeat and grown- up love songs delivered in Glier’s youthful tenor hold our attention.” – ELMORE MAGAZINE

“8 out of 10 stars – Glier had made a pop album that is full of catchy songs yet still conveys a genuine sense of emotion.” – GLIDE MAGAZINE

"charming pop sensibility…an album that reminds listeners of artists like Ed Sheeran and Ryan Tedder (of OneRepublic), Seth Glier does find his own distinct voice and sings with a timbre and tonality that is simultaneously airy and vibrantly smooth." – BROADWAY WORLD