Georgia Band Director Patrick M. Erwin Named Recipient of the 2015 George N. Parks Award from the National Association for Music Education and Music for All

In honor of the late George N. Parks, Professor of Music at the University of Massachusetts/Amherst, and the director of the Minuteman Marching Band for 33 years, and founder of the Drum Major Academy® in 1977, band directors have been nominated for the award with his namesake since 2011. The fifth recipient was named on November 14, 2015. 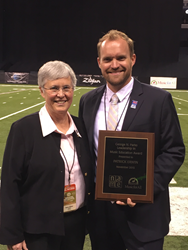 The George N. Parks Award is about doing the best we can to educate our students to be great musicians and great citizens. I'm just lucky they put my name on it.

The National Association for Music Education (NAfME) announced that Patrick M. Erwin, Director of Bands at Hillgrove High School in Powder Springs, Georgia, is the recipient of the 2015 George N. Parks Award for Leadership in Music Education. Patrick received the award at the Bands of America Grand National Championships in Indianapolis on Saturday, November 14, 2015.

“The George N. Parks Award honors an exemplary music educator who embodies the characteristics and leadership that Mr. Parks showed his students every day,” said Michael A. Butera, executive director and CEO of NAfME. “The recipient must have a collaborative spirit, dedication to knowing the students as people, perseverance and enthusiasm, and an ability to instill qualities in students beyond the musical. We are greatly pleased to present Patrick M. Erwin with this year’s honor.”

A member of the Georgia Music Educators Association, and of NAfME for 10 years, Patrick Erwin has been a band director at Hillgrove High School in Powder Springs, Georgia, since the school’s opening in August 2006, where he was promoted to Director of Bands in 2013, after being instrumental in establishing the program while he acted as the Assistant Band Director. Over the past nine years, the band program has grown from 65 students to more than 350 students today. Active as an adjudicator and guest conductor, Patrick “works diligently to share his passion of teaching music to as many students as he is able,” said Lori Sweet, Operations Manager for the Hillgrove Bands.

“This award has my name on it, but it's really for all of us,” said Patrick at the awards ceremony last Saturday at Lucas Oil Stadium. “It's about surrounding ourselves around great people, and doing the best we can to educate our students to be great musicians and great citizens. I'm just lucky they put my name on it.”

Developed by NAfME and Music for All, the award is named for George N. Parks (1953–2010), director of the University of Massachusetts Minuteman Marching Band at the University of Massachusetts Amherst from 1977 until his death. Considered a national authority on drum majoring, he led the George N. Parks Drum Major Academy, a summer workshop program for high school drum majors.