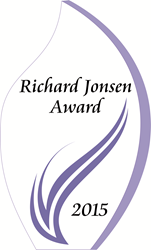 The WICHE Cooperative for Educational Technologies is pleased to announce that Dr. Linda Thor, chancellor emeritus of the Foothill-De Anza Community College District, has been honored with the Richard Jonsen Award at their 27th Annual Meeting in Denver, CO on November 11, 2015. The Richard Jonsen Award is given annually to a WCET member whose career has been committed to improving postsecondary educational programs and services through innovative uses of technology as well as for exceptional service to WCET.

The award is named in honor of Richard Jonsen, the WICHE Executive Director who nurtured the idea of a technology cooperative and founded WCET in 1989.

Exuding the principles espoused in the award, Dr. Thor has served the higher education community for over forty years with a pioneering and visionary spirit that has supported success for many students, many of whom might not have had a pathway without the opportunities Dr. Thor set in place.

“Linda saw what was possible with online learning and even in the face of many obstacles, led Rio Salado College into this new learning modality,” said Dr. Chris Bustamante, President of Rio Salado College. “It is because of Linda’s courageous perseverance and commitment to making sure online students have quality services that Rio Salado is now able to serve more than 56,000 students, nearly 30,000 online students, as a single community college.”

A nationally recognized innovator in education, Thor was the sixth chancellor since the Foothill-De Anza Community College District’s founding in 1957. During her tenure, the college district won the bid to lead the statewide Online Education Initiative, a $57 million effort involving California’s 113 community colleges, became one of 15 districts to pilot the community college baccalaureate degree, and received 9 acres from the federal government in a public benefit conveyance to build a new education center.

“Her understanding, creativity and knowledge about both students and how to make online learning work, make her a visionary in our world of technology-enhanced learning,” said Patricia James, Executive Director, CCC Online Education Initiative “and her sense of humor and down to earth thinking are characteristics we all should emulate!”

Dr. Thor has been a long-time supporter and friend of WCET. She served on the Executive Council for two terms and more recently, was appointed by Governor Brown to the WICHE Commission and served on the Commission committee to which WCET reports.

About WCET
The WICHE Cooperative for Educational Technologies (WCET) is the leader in the practice, policy, and advocacy of technology-enhanced higher education. WCET is widely recognized as one of the most informative, reliable and forward-thinking organizations regarding the role of technology and innovation in higher education. More information about WCET’s institutional membership resources and services can be found on WCET’s website - wcet.wiche.edu.