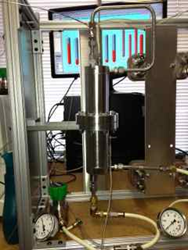 “Demonstrating Brillouin Energy’s latest reactor modules on Capitol Hill is a wonderful opportunity to increase awareness of our clean energy “fuel-free” technology to Congress and others among U.S. governmental and scientific representatives,” explained Robert Godes, President and CTO of Brillouin Energy Corp. “Additionally, this demonstration allows us to present the significant progress that has been made toward commercializing the development of Brillouin Energy’s LENR technologies.”

As Dr. Michael McKubre said, “it is very clear that something on the order of four times (4x) and potentially more gain in power (and therefore ultimately energy) was achieved at an impressive and industrially significant operating temperature of around 640°C. To my knowledge this had not been achieved before in the LENR field. That the Brillouin Energy Q-PulseTM control system is capable of triggering the excess power on and off is also highly significant.”

The nickel metallic reactor core module is very small relative to the amount of thermal energy output, making the technology very clean and efficient with a virtually inexhaustible fuel supply. Brillouin Energy is currently working to scale the heat production up to commercial output levels.

About Brillouin Energy
Brillouin Energy is a clean-technology company based in Berkeley, CA, which is developing, in collaboration with Stanford Research International (SRI), an ultra-clean, low-cost, renewable energy technology that is capable of producing commercially useful amounts of thermal energy.

Brillouin Energy’s technology is a proprietary method of electrical stimulation of nickel metal conductors using its proprietary Q-PulseTM control system. The process pulses the system to generate excess heat. The excess heat produced is a product of reactions in hydrogen (from water or gas) in the nickel metal lattice.
The LENR process is neither fission nor fusion, but like fusion, it does convert hydrogen into helium releasing the tiny mass difference as large amounts of heat. The physics of LENR is quite different from fusion because it relies on the synthesis of ultra-cold neutrons using a proton- electron-capture reaction. Ultra cold neutrons accumulate on hydrogen to form helium, heat and a high-energy electron. Only hydrogen fuels the reaction and the output is non-toxic helium and zero CO2.