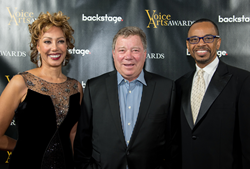 "This is the voiceover industry's most important event." Aditya Sood, Producer of The Martain

The Society of Voice Arts and Sciences™ (SOVAS™), the nation's largest professional organization for the advancement of opportunities and recognition of excellence, in the voiceover industry, celebrated its 2nd Annual 2015 Voice Arts® Awards ceremony with record success. The 2015 Voice Arts®Awards in Los Angeles was held on Sunday November 15th at the Pacific Design Center. The ceremony included a star-studded red carpet at the pre event cocktail reception, a lively awards show featuring a who’s who cast of participants from the voiceover industry, media and professional circles, and a humorous and well-deserved tribute to William Shatner, by acclaimed comedy writer Bruce Vilanch. The Voice Arts® Awards is an international competition showcasing the best work in professional voiceover acting, creative direction and communications for advertising, audiobook narration, movie trailers, video gaming, animation, radio, television and casting realms. Entries were submitted from various entities including: Wendy’s, Telemundo, Discovery Channel, CNN, NBC Sports, ABC Entertainment, Comedy Central, Oxygen Network, NBA on TNT, FOX, Ovation Network and many others.

“The 2015 Voice Arts® Awards ceremony was full of excitement, and the recognition that was given to the leading talents in voiceover gathered from around the world—both the nominees and winners—was well deserved and long overdue,” said Rudy Gaskins, CEO of the Society of Voice Arts and Sciences™. “The participation of all of our supporters, including general attendees, presenters, sponsors, voice actors and volunteers, enabled us to have a vibrant evening of awarding accomplishments in voice arts, while also bringing joy at a time of international tragedy, as the ceremony was held in the hours after the Paris terror attacks.”

One special announcement made at the ceremony was by presenter Ed Loh, the editor in chief of Motor Trend Magazine, who shared that in 2016, the Voice Arts® Awards will open special automotive categories, for TV, radio, in-theater and web, where voiceover is the driving force behind the creativity. These new categories will cover more than just the cars themselves, but voiceover driven communications (commercials, etc.) about car parts, car racing, and TV shows about cars.

That’s Voiceover!™, which is an in depth Career Expo™ that covers training and job creation in the voice acting industry, occurred the day before the VOICE ARTS® AWARDS ceremony. The 2-day event of nearly 1,000 attendees featured auditions with voiceover industry executives, workshops, interactive exercises, showcases and performances. One of the main conference highlights was the panel discussion featuring Aditya Sood; the Hollywood super producer of the top grossing box office film, The Martian, R.C. Bray; the film’s audiobook narrator along with James Tonn and Greg Lawrence of Podium Publishers; the audiobook publishers who produced the story when traditional printed book publishers passed on the project. Michael Winslow, the talented actor and master of sound, best known for his show-stopping talents in the Police Academy films series, also led several inspiring master classes on sound and voice, and participated in the ceremony. Also presented at the conference, in partnership with Backstage® Magazine and the Society of Voice Arts and Sciences™, was the Backstage® Vanguard Award for Outstanding Casting, which was presented to Pixar Animation casting honchos Kevin Reher and Natalie Lyon.

The 2015 Voice Arts®Awards full list of winners and nominees are featured at Voice Arts®Awards 2015 Nominees. Event photos and special highlights, including the presentation by Bruce Vilanch of a special award presentation of the Voice Arts® Icon Award–the jury’s highest honor– to William Shatner, for his lifetime of achievements, can also be found on VoiceArts.org.

Purpose
The purpose of the Voice Arts® Awards is to provide international acknowledgement of the extraordinary skill and artistry of voiceover acting and associated industry professions. The Awards also encourage a best-in-class standard of achievement to which the voiceover industry can continually aspire. The Voice Arts® Awards will honor and acknowledge the voice actors, creative directors, copywriters, casting directors, talent agents, directors, producers, audio engineers, account executives, equipment manufacturers, podcasters, bloggers and others who create and sustain excellence within the voiceover industry. The Voice Arts® Award represents one of a host of programs administered by the Society Of Voice Arts And Sciences™ (SOVAS™), a non-profit 501 (c)3 corporation, whose overall mission is to the highest levels of artistic achievement, while providing support for education, training, career advancement and gainful employment throughout all facets of the voiceover industry.