Dr. Parsa Mohebi, medical director of Parsa Mohebi Hair Restoration describes the importance of aesthetic appearance of the candidates and how it greatly matters. 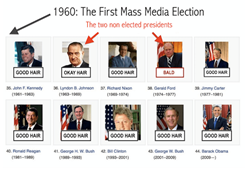 The presidential race normally deals with political issues of national importance more than it does matters of personal styling. So why is it a national news story when Donald Trump makes disparaging remarks about Hillary Clinton’s hairstyle? It is a big deal, according to Parsa Mohebi, M.D., because appearances count more than anyone wants to admit when it comes to how people are viewed by others.

Dr. Mohebi says “a good head of hair might be the physical feature viewed most favorably by the public.” Some might feel that Donald Trump is the last person to comment on the hair of anyone else since his own hair has been the subject of much discussion for many years. There are some who think his hair is not real while others are convinced that Trump was the victim of a bad hair transplant many years ago. In fact, Trump’s hair was the subject of a Saturday Night Live skit that was cut for time during his recent appearance as the host of the show.

Dr. Mohebi of Parsa Mohebi Hair Restoration, explains the way a candidate looks matters greatly and dates all the way back to 1960 and a presidential candidate with a good head of hair. The year 1960 saw the first ever televised debates between presidential candidates and John F. Kennedy’s good hair and overall appearance stood out over Richard Nixon’s sweaty appearance. As more and more debates appear on a variety of news channels, Dr. Mohebi says the overall appearance of the candidates is essential to gaining the trust of voters.

Parsa Mohebi, M.D., a noted Beverly Hills hair transplant surgeon says, “Hair plays a huge role in the way we are viewed by others and also in the way we judge other people. Modern hair restoration techniques offer great solutions that allow most men to restore their hair without others being able to detect any changes. Making a change with your hair doesn’t mean a person has to run for the highest office in the land. It just means you can make a change and be more confident in your appearance and daily life.”

As 2016 approaches and the next presidential election takes place, there will be more news stories about the candidates along with reports on their standing in the polls. According to Dr. Mohebi, “it’s more essential than ever for candidates to look good because in the world of politics, appearances matter just as much as the record of the candidates.”

About Dr. Parsa Mohebi:
As former chairman of the FUE Research Committee and creator of several methods and techniques in modern hair restoration, Dr. Mohebi, along with his incredible staff, provides the most advanced techniques in the industry. Dr. Mohebi prides himself in advancing new research and developing the latest technology to improve the quality of hair restoration. The overall goal at his office is to restore patient’s self-esteem through the use of quality hair restoration techniques.