”Dying Words: The AIDS Reporting of Jeff Schmalz and How It Transformed The New York Times,” will be released on December 1, 2015, to coincide with World AIDS Day. The multi-media project will be in audio documentary form with a companion book about the groundbreaking journalist who covered the AIDS epidemic as he was dying of the disease. 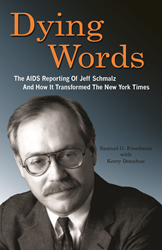 ”Dying Words: The AIDS Reporting of Jeff Schmalz and How It Transformed The New York Times,” will be released on December 1, 2015, to coincide with World AIDS Day. The multi-media project will be in audio documentary form with a companion book about the groundbreaking journalist who covered the AIDS epidemic as he was dying of the disease.

A collaborative effort led by author, professor and journalist Samuel G. Freedman and radio producer Kerry Donahue, the project will air on radio stations across the country beginning in November and the book will be released by CUNY Journalism Press on December 1, 2015.

The audio documentary, produced by Kerry Donahue and edited by Ben Shapiro, will be distributed by PRX to public radio stations around the country and also be available as a podcast. The companion book consists of about 35,000 words of text, including excerpts from Jeff’s work, and will be released as both an original paperback and ebook.

“Jeff Schmalz was a journalistic prodigy,” said producer Kerry Donahue. “He was hired by The New York Times while a college student, running its metropolitan coverage by his mid-20s and regarded as the ‘consummate Timesman. People in the newsroom thought that he we be a top editor one day, not knowing he was struggling with his identity as a gay man. He came out to many friends and peers at the Times, but kept his sexual orientation secret from the newsroom management."

“Jeff was my mentor,” said Samuel Freedman, himself an award-winning journalist and author who currently writes a religion column for The New York Times. “I will never forget the day in December of 1990, when Jeff collapsed in the newsroom with a brain seizure. It was the first evidence that he had full-blown AIDS – a death sentence in these years before drug cocktails were available.

“With AIDS, Jeff was endangered and he was outed,” Freedman continued. “Yet he was also cracked wide open in positive ways. He found his calling in writing about HIV and AIDS, doing memorable portraits of Magic Johnson, Mary Fisher and other, as well as chronicling his own experience reporting on the most personal beat imaginable.”

Schmalz’s work is credited with changing The New York Times coverage of gay issues. The New York Times of today – publishing same-sex wedding announcements, editorializing in favor of marriage equality and covering LGBT issues in more and more depth – is the fruition of changes that Jeff helped set into motion but never lived long enough to fully see. Now, 22 years after he died at age 39, his contributions have been largely forgotten.

“Our hope is that ‘Dying Words’ will restore Jeff’s name and work to the annals of LGBT history and journalistic history,” concluded Freedman.

Both the documentary and the book draw upon extensive interviews, existing recordings by Schmalz, and excerpts from his AIDS coverage. Over the past year, the team interviewed major journalists including Anna Quindlen, Adam Moss, Arthur Sulzberger, Jr., and Elizabeth Kolbert, as well as the AIDS activist Mary Fisher and the LGBT historian Eric Marcus. In addition, the audio includes original recordings of Schmalz’s interviews with Magic Johnson, Bill Clinton and others. Wendy Schmalz, Jeff’s sister, who is his closest living relative, has worked closely with and supported the efforts of the team.

The book is now available for pre-order here: http://press.journalism.cuny.edu/

Samuel G. Freedman is an award-winning author, columnist, and professor. A columnist for The New York Times and a professor at Columbia University, and he is the author of the seven acclaimed books. He has been a finalist for the National Book Award and the Pulitzer Prize and has won the Helen Bernstein Award for Excellence in Journalism and the National Jewish Book Award.

Kerry Donahue is an experienced radio producer and the director of the radio program at Columbia University Graduate School of Journalism. Her work has been heard on PRI, PRX, NPR, WNYC, WBGO, and Marketplace. A former executive producer at WNYC, Kerry was part of the team that launched The Takeaway with John Hockenberry in 2008 and was the executive producer of “Pop & Politics with Farai Chideya". She was an early podcast pioneer in her role as a producer of original content at Audible.com, a subsidiary of Amazon and the leading site for downloadable premium audio content.

For more information go to: http://dyingwordsproject.com/