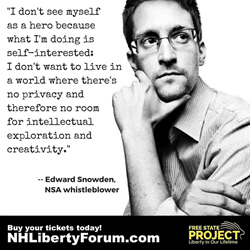 Snowden’s disclosures about the NSA illegally seizing the private records of billions of individuals who were not suspected of any wrongdoing launched a historic debate about national surveillance practices. Largely as a result of his efforts, the NSA’s bulk collection of telephone metadata was ended just this week.

Snowden will address Liberty Forum attendees via Google Hangouts at the Radisson Hotel in downtown Manchester on Saturday, February 20, 2016. The Free State Project is a movement of 20,000 pro-liberty activists who are moving to New Hampshire to build a freer, more voluntary society. So far, nearly 2,000 FSP participants from around the world have already made New Hampshire their home.

“Ron Paul, who spoke at Liberty Forum in 2007, called Snowden a hero. Many in our movement would agree,” says Free State Project President Carla Gericke. “Snowden’s bravery to come forward at great personal cost to himself really resonates with our community.”

The theme of Liberty Forum 2016 is “Living Liberty.” In addition to Snowden’s talk, attendees will hear from Free State Project early movers, thought leaders, and tastemakers. Topics include the NH Department of Education’s lawsuit against the Town of Croydon regarding school choice, civil disobedience relating to the City of Portsmouth’s ban on the rideshare service Uber, and a NH Supreme court case about the religious rights of the Church of the Sword, a libertarian church founded by FSP early movers. Several presidential candidates plan to attend the conference as well.

Tickets to Liberty Forum are now on sale at http://www.NHLibertyForum.com.