Thirty-five years later, a parody by John Kennedy Toole Jr. of the greatest American comedic novel of all time, "A Confederacy of Dunces," appears. 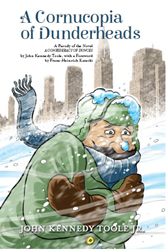 Ignatius, originally of "A Confederacy of Dunces," is now back in "A Cornucopia of Dunderheads."

"Oh, baby! Died the hardest with laughter ever since I died!" --Elvis Presley, channeled at M. Ruth's Hoodoo Shop

Ignatius J. Reilly is back.

Ignatius, the hero-antihero of John Kennedy Toole's "A Confederacy of Dunces" (published in 1980 and winner of the 1981 Pulitzer Prize for fiction), has reappeared once again....Not in a sequel...Not in a prequel...But in the parody "A Cornucopia of Dunderheads," a book recently issued by Baidarka Boy, an imprint of Brooklyn Bridge University Press.

"A Cornucopia of Dunderheads," authored by John Kennedy Toole Jr., recently made its appearance on Amazon.com and is soon scheduled for release on other venues.

John Kennedy Toole Jr. refused to grant an interview for this press release, but Ignatius was more than willing to speak.

Is Ignatius happy to be in the public eye once again?

"Happy is not the word, you nepotistic mongoloid," Ignatius said after burping loudly. "And neither am I ecstatic. Suffice to say, 35 years of silence is way too long. The world needs to hear from me once again because the world needs proper theology and geometry. Now, if you will excuse me, I must have a foot-long hot dog before I attend to urgent matters in a nearby bed."

Besides featuring Ignatius, the book has appearances by Myrna Minkoff (Ignatius's nemesis-friend), Myrna's parents (Mr. Minkoff and Mrs. Minkoff), John Kennedy Toole, Ed Sullivan, and a score of other wacky and zany characters slated to delight the most hardcore of Dunces fans, along with anyone else who enjoys a hearty laugh in the holiday season.